After consulting with weather guru Chris Parker, unexpectedly made the decision this afternoon to leave tomorrow, 13 May for Flores , Azores - a passage of some 1700 nmiles direct but will probably be much further as we have to go round the Azores High. Expect to be at sea for 2 to 3 weeks so Blog will not be updated for a while.
Posted by dutchlink at 01:53 No comments: 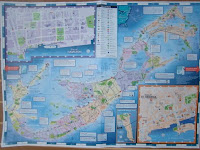 Entered the narrow Town Cut entrance to St George, Bermuda at 1300hrs on Monday 3 May

and tied up to the cu 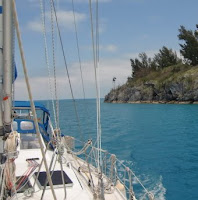 After filling in a few forms and paying our 35 dollar each check in fee to the friendly officials, we anchored close by in the Convict Bay Anchorage - good holding in 5 meters (32deg22.7N 064deg 40.3W).

There was one Cruise Ship in the harbour - since we were here last June, very few cruise ships stop here partly because t

he Town Cut is too narrow for the larger ships. Most dock in Dockyards close to the capital Hamilton. 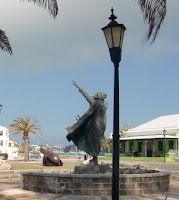 Bermuda celebrated its 400th Anniversary last June - The first UK settlers arrived by accident from the UK on the Sea Venture which was ship wrecked close to St George on 9 June 1609 on its way to the colony in Jameston in Virginia.

There is a statue of Sir George Somers, admiral of the Sea Venture and generally honoured as Bermuda's founder, on Ordnance island. 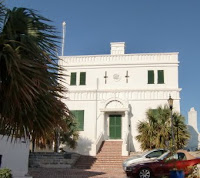 Many of the well preserved buildings in St

George date back to this period onwards. 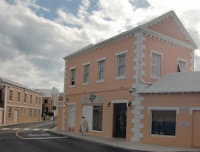 Every Wednesday at 1000hrs BIOS (Bermuda Institue of Ocean Sciences) welcomes visitors to a tour of the facilities.

Vanessa, our very informative guide, gave us an overview of BIOS's role in monitoring the state of the ocean providing amongst other things, invaluable data on the effect of global warming on the planet. 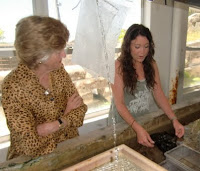 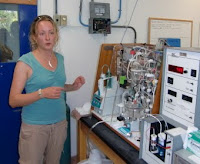 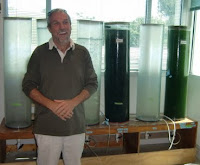 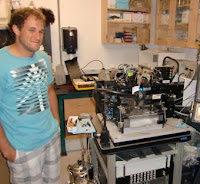 Every so often the researchers sail on their large research vessel the Atlantic Explorer to take samples of the ocean water using there computer operated sampling equipment down to depths of several thousand meters.

Being situated on top of a seamount, Bermuda is in the unique position of having safe harbours surrounded by the ocean with depths plumm 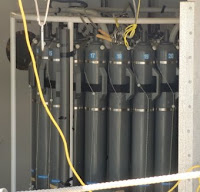 centres would have to sail many miles before reaching such depths. Bermuda is also unique as, due to the close proximity of the Gulf Stream, the water is warm enough to allow Coral reefs to thrive at such a high lattitude (32deg N).


Bermuda has an excellent t

ransport system with a comprehensive bus system plus regular fast cat ferry service between St George, Dockyards and Hamilton - for 55 US dollars, one can buy a month pass entitling one to unlimited bus and ferry usage.

During the week we have been here we have visited Hamilton a few times as well as other parts of the island. The Dutch Cruise ship Veendam was in Hamilton.

During one of the trips, we paid a visit to

the High Court where a trial was underway of a gang who had conducted a brutal attack on the defendant. That night someone was shot dead at the same house where the first attack had taken place a month earlier - although tiny, Bermuda also has its crime problems - may be exacerbated by the 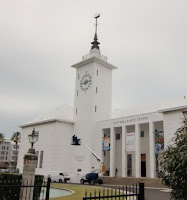 current economic downturn.
Posted by dutchlink at 14:59 No comments:

After at least 6 months pottering down the USA coast and in the Bahamas, we have converted Dutch Link back from pottering to passage mode.
Everything stowed away, food bought refuelled and water tanks filled. With the Windpilot self steering gear installed on the stern and the dinghies stowed on the aft deck. 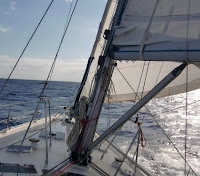 We left Marsh Harbour on Great Abaco Island in the Bahamas at 0800hrs Tuesday 27 April for the 760 nMile passage to Bermuda. course 061 degrees true. For the first 12 hours we were broad reaching in a WSW 4/5 Bft with 2 reefs in main and full yankee. We crossed the forecast cold front (we are in daily HF conact with Chris Parker for weather routing advice) in the early hours of Wednesday with the wind rapidly shifting to the NW and gusting over 35 knots. We partly furled the yankee and had an amazing sleigh ride for the next 12 hours making 8 to over 9 knots in confused 12 foot breaking waves. Luckily we had started taking our sea sickness pills from the beginning of the trip otherwise we would have both been sick - as it was , no problem except felt like sleeping most of time.

By midday Wed, winds dropped off to a WNW 4/5 Bft and the seas moderated.

By midday Thursday wind disappeared altogether as we entered a ridge of high pressure and had to motor for next 24 hours to cross it. Then had a frustrating few hours trying various sail combinations in light variable following winds with rolly sea.

Finally decided to install Twistle around midday Friday and have since been twistling effortlessly along, mainly between 5 and 6 knots in light westerly wind - no other sail configuration can match the Twistle in these conditions. It took almost 3 hours to r

ig the Twistle (Had to drop yankee to install extra halyard to hoist second yankee and re-remember how to rig it all). It took longer than it should partly because the knot on the rope to secure one of the poles came loose requiring Mike to do so gymnastics to retie it.

However,it has been more than worth the effort.

A large pod of dolphins came to greet u 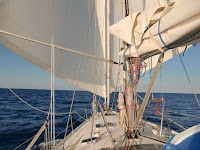 s playing just in front of the bow as we were about to rig the Twistle.

Although the wind was light ( 6 to 12 knots true) the Twistle did its job perfectly giving us a relaxing 40 hour hassle free passage making a SOG of 4 to 6 knots in the right direction. The skies were almost cloudless and with a full moon on 29 April, amazingly light nights. 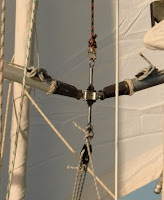 However, 2200hrs Sunday night, enough wind appeared so that engine could be shut off and Twistle once more unfurled.

We are still Twistling along at 1000 hrs this morning 3 May just a few miles off the Bermuda coast making 2.5 to 3.5 knots with just 1

5 miles to go to the harbour of St George - put out the Alpha Awus Wifi antenna and low and behold we have internet 4 miles offshore - amazing.

Most of the off watch periods are spent sleeping in the saloon.
Posted by dutchlink at 14:01 1 comment: