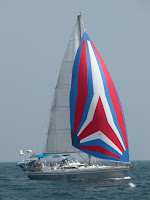 Having finally torn ourselves away from Kemer in April 2007, we said farewell to the Med , and after a few weeks in Graciosa, Lanzarote and Gran Canaria we arrived in Tenerife for the start of the 14th Les Iles du Soleil Raleil. 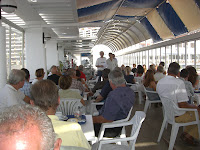 The rally started with a welcome/info meeting in the Club Real Nautica in Santa Cruz Tenerife. After a week getting to know other rally participants and making the final preparations we set sail for the 850 nm passage to Mindelo on Sao Vincent in the Cape Verde Island group.

The first 2 days were very relaxing as there was very little wind requiring the use of the iron sail. Then the NE-erlies filled in and the next 4 days were an excilerating sleigh ride goose winged run. 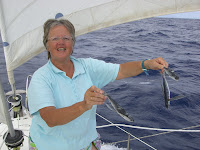 The only fish we caught were those that just flew onto the deck - in total about 15 flying fish offered themselves to us. Several groups of dolphins paid visited us - always a welcome sight as they played around the boat often swiming just a few centimeters in front of the bow. 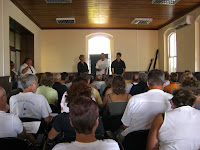 In Mindelo, Philippe, Nicolas, Patrick, Jackeline briefed us all in French and English about Mindelo and the Cape Verdes.

We were enchanted by the music of the islands which is played and sung live in most of the restuarants in Mindelo.

We were very fortunate that we were allowed to moor in the new marina instead of having to anchor off - very good as we planned to take the ferry to the neighbouring island of St Antao for a few days hiking in the wonderful moumtainous landscapes. 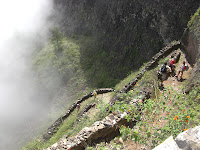 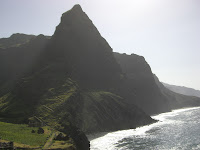 St Antao is an island with many faces. The south of the island is many desert. Once one has climbed to the tops of the the mountains and looks north, the scenery drastically changes with green fertile valleys between the precipitous cliffs. The hike along the north coastal path is spectacular 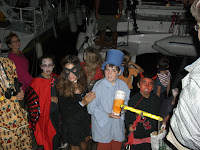 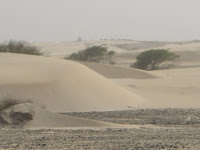 The largely desert island of Boa Vista was a great contrast to the verdant St Antao. 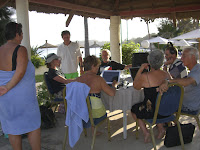 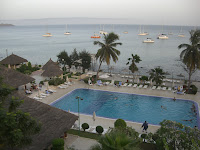 We were lucky to get presidential authorisation to anchor off the Presidential Palace in Dakar and the Sofitel Hotel gave us free access to their suberb facilities - these included use of their small secure beach to beach the dinghies, use of the beautiful pool and free WiFi - a real luxury.