Motored the few miles to Man O'War Cay 22 April and had an interesting time anchoring just north of the shallow northern entrance to the harbour. Thought the anchor was holding fine till snorkelled over it to fine that not only was the chain looped around some rubbish but that the anchor had snagged and was held by two thick electricity cables. Managed to dive down in 4 meters water and pull anchor free and reset it (unusual for me (Mike) as have not been able to get that deep for a long time due to sinus problems (26deg 35.99N 077deg 00.78W).

Dinghied in to the harbour and had a walk round the very protected harbour.

23 April sailed slowly down under yankee to Sandy Cay where we anchored (26deg 24.13N 076deg 59.56W) and dinghied to dinghy mooring buoys to the east of the cay. Snorkelled over the many fan corals on the beautiful live reef seeing a Baracouda, Ray and many colourful reef fish.

24 April dinghied to the beach and had a 6 + mile walk to the very neat Hope Town and back along the Ocean Beach. 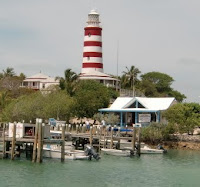 Hope Town is an allround protected hurricane hole boasting the only fully manned Lighthouse in the Abacos. The island is largely developed with many expensive houses and has a very prosperous feel to it. Ended the day with sundowners on S/V Goose Bumps with Mi