Mike's recovery from his Hernia operation 5 weeks ago seemed to be pretty well complete so we had been keeping an eye on the Grib files for the last week or so. Friday 22nd June was looking more and more like a good time to start our planned 750 nautical mile trip from Las Palmas in Gran Canaria to the Azores. However, the Grib files downloaded on Thursday mornng showed that there would be a big advantage if we could set off that afternoon as we could clear the NE point of Tenerife before the northerlies strengthened too much. 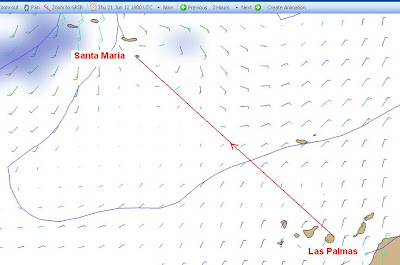 So, we speeded up our preparations, checked out of the marina and at 1605hrs Thursday 21June we left our berth and motored over to the fuel dock. At 1623hrs, we were on our way out of the marina. 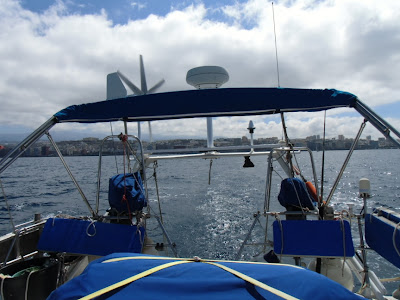 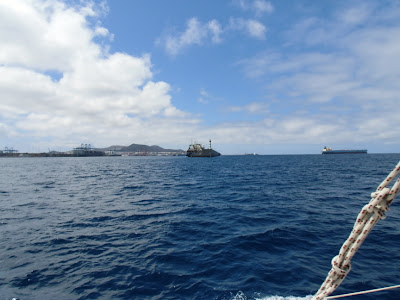 As expected, the first part of the trip was pleasant motoring against a light northerly wind with very little swell or waves. There was no point in trying to sail as with such a light wind plus a half knot SWesterly going Canaries Current, we would have made no headway. 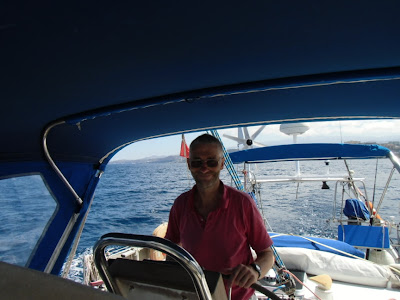 By 2100 hrs, Mt Teide on Tenerife was clearly visible 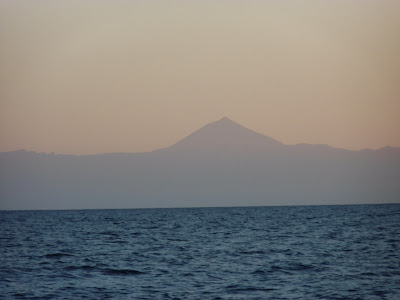 In the early hours of Friday morning, the wind gradually started to build. By 0930hrs we were well to the north of Tenerife and started  sailing in a ENE 4/5 Bft at 70 degrees to the apparent wind making 5 to 6 knots with two reefs in the main and full Yankee. Very pleasant. 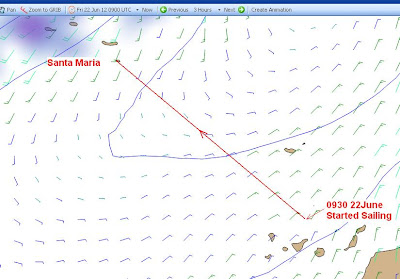 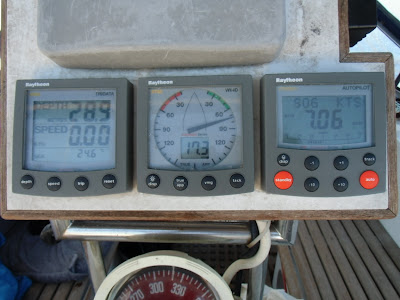 During the next two days the wind direction stayed in the ENE /NE strength varying between force 4 and 6 with gusts up to 28 kts. The seas became a bit choppy and sailing for many hours heeled over on a fine reach gets a bit tiring . 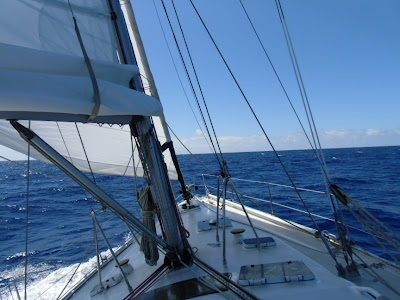 The only incident that happened was that one of the gymbals from which the gas oven is suspended broke requiring an hour's repair work - luckily we could effect a permanent repair replacing the gymbal with a bolt and could then continue to use the oven. 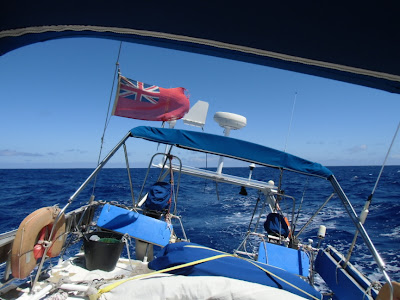 During the trip AIS again proved its worth warning us of the close encounters with two ships. On calling the first, the M/V Lilac, on Ch 16 , it was agreed that we would both hold our courses and MV Lilac passed our bows one mile ahead of us. 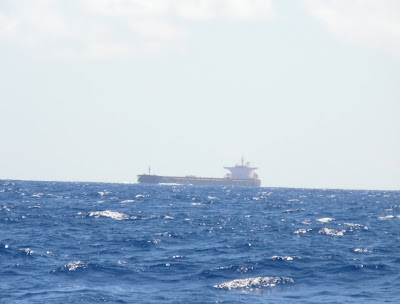 The second close encounter, Bulk Carrier MV Cape Elise actually called us up for a chat - she was carrying coal from Columbia to Portugal and , when asked why he was only making 9 knots (ships of this size usually are making around 15 knots) the skipper told us this was his economical speed - maybe the high current oil price is having an impact. The M/V Cape Elise passed us two miles astern.

Omninous dark clouds on the horizon after sunset 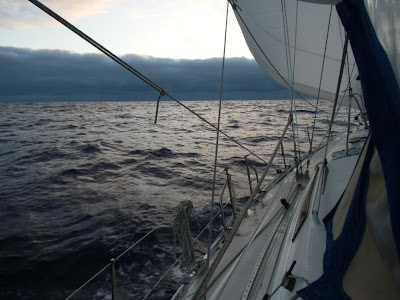 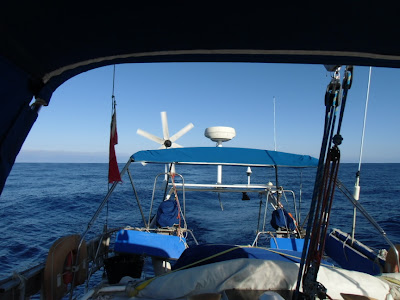 As predicted by the Grib files (we download them every day or so using our Iridium Satelite phone ) by the afternoon of the 25th June we entered the centre of the ridge of high pressure extending to the SW of the  Azores High and the wind dropped to a whisper and we started motoring at 1410hrs. 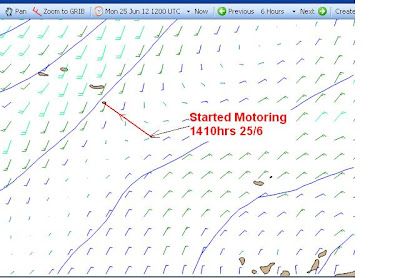 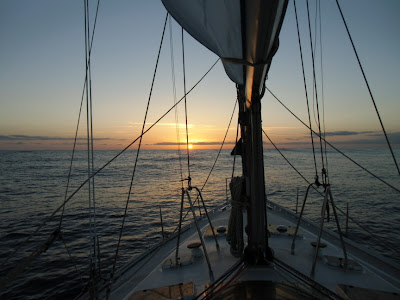 Just after sunrise of 26th June, we reached the west side of the ridge of High Pressure and picked up a nice SSWesterly 4Bft breeze enabling us to have a pleasant broad reach sail for a few hours - a very pleasant change to the sound of the faithful diesel engine 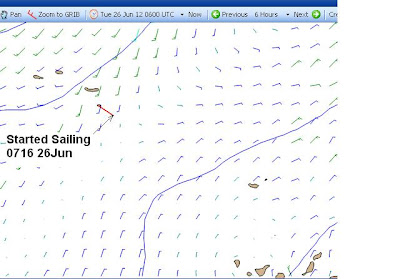 At 1350hrs our progress was suddenly halted by a very abrupt wind shift with the wind shifting over 90 degrees in a matter of minutes and coming from the WNW  - more or less dead on the nose. So Engine once more on for the last 15 miles.

Land Ahoy - Santa Maria, the most SEasterly of the Azorian Islands comes into view on the afternoon of the 26th June - a very welcome sight after days at sea. 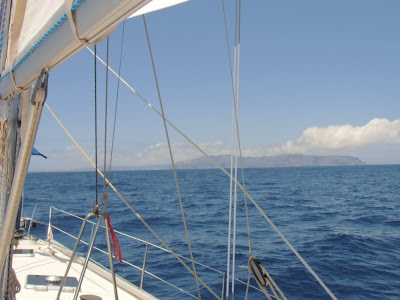 At  1635 on Tuesday 26th June we were welcomed and helped to moor in Vila do Porto marina on Santa Maria by Armando Soares, our very friendly Harbour Master who we know since our first visit 2010 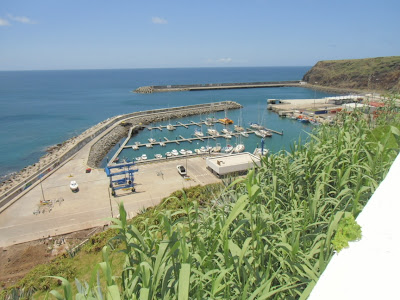 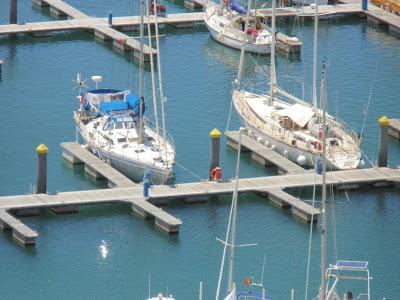 Hello Mike and Jeannette, great reading. Glad there are sailors like you, I am a genuine landlubber. We climbed the Ventoux. In an airconditioned car...... Very nice views and lots of wind. Apart from the lack of water it would be good for sailing...