For our on board WiFi we have, for several years, used the Alfa AWUS036H  1 watt Long Range USB adapter with 9dBi  antenna connected via a 5 to 10 meter long USB2.0 booster cable to our Laptop PC

Hung in the rigging inside a plastic bag inside a waterproof bag, this has proved to be reasonably good for enhancing weak WiFi signals 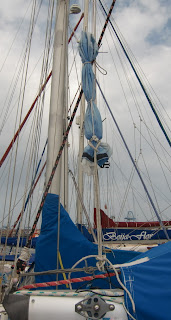 With the acquistion of an IPad, however, another solution had to be found as there is no USB 2 connection on the IPad. As is usual these days, if one Googles the problem, one will find that somebody somewhere will have had the same problem and most likely somebody will have produced a solution. In this case , the solution came in the form of the Alfa R36 3G Mobile Router (white box in below photo). 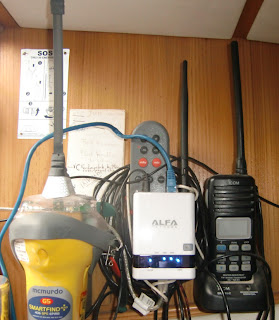 The USB cable from the AWUS036H connects to the base of the R36 and the R36 retransmits the received but amplified WiFi signal as one's own WiFi network which can be received by any WiFi device. Instead of connecting the USB AWUS36H , one can connect a 3G modem and also create one's own WiFi network.
Also, one can connect the R36 directly to a PC via an Ethernet cable for quicker data trasnsfer speeds.

The WiFi signal we were receiving in Las Palmas Marina was very weak and unreliable. So I investigated a better WiFi antena and came up with the ALFA  APA-L2414 directional Panel Antenna - shown below hanging in the rigging 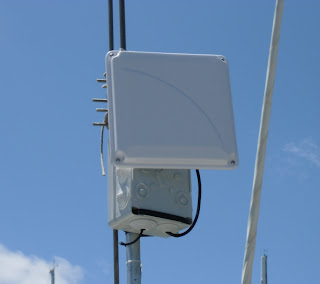 The ALFA  APA-L2414 antenna connects to the AWUS 036H adapter using the same connection as the 9dBi antenna. For weather proofing, I have installed this in a plastic junction box. The AWUS 36H is connected to the R36 as before. 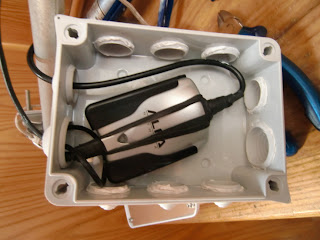 Below , the ALFA  APA-L2414 antenna / AWUS 36H adapter combination in suspended in the rigging 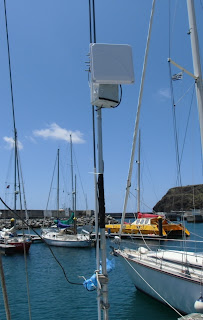 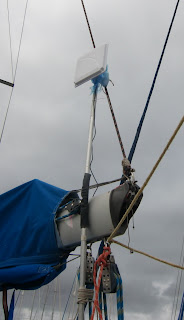 So far, as long as the boat is not swinging eg. at anchor, the ALFA  APA-L2414 antenna / AWUS 36H adapter combination has proved to be far superior to the AWUS 36H adapter with just the 9dBi antenna. In Las Palmas marina we manged to finally have very acceptable WiFi - we managed to pick up the LPGC signal instead of the Marina WiFi , which proved to be very good.

All the above equipment is available in Las Palmas at VIRATEL which is located at Juan Rejón, 49

cable usb what length? the active?