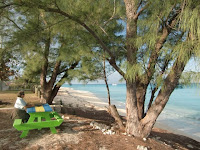 20 Feb Had a leasurely stroll around the southern tip of North Bimini. 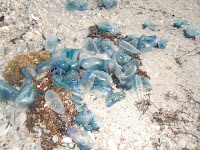 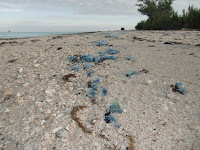 Further along a wreck was rusting away hard against the coral - reminder of what can happen. 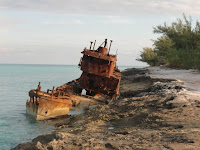 Alice town looks as though the downturn in the economy has hit it quite badly with many of the buildings either in ruins or in need of repair. The marina where we moored is almost empty - however this is low season for them and we understand from chatting to a local man that they are quite resilient to the econ 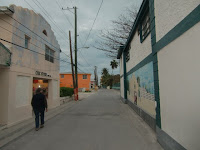 omic whims - and there more than enough food in the ocean for them to survive.

Left Bimini at 0900hrs in the company of S/V Just Imagine and S/V Vespera and headed north for North Rock. There we turned to the right and headed eastwards over the Great Bahama Banks, a most amazing feature. The Banks are a huge coral sand plateau with water depths averaging around 5 meters stretching in the north from Bimini 100 miles eastwards to the Berry Islands and over 200 miles southwards. 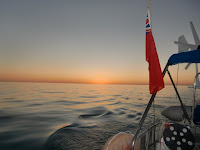 unreal traveling such long distances in such shallow but exposed water which is so clear you can see the bottom not far below you. We had almost perfect weather - 10 kts wind and blue skies surrounded by calm turquoise water - what made it not quite perfect was that the wind was on the nose so motoring. The sunset was amazing. By 2000hrs we had covered the 60 miles from North Rock to the NW shoals, a few miles west of deep water. 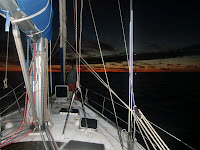 There we dropped anchor in the dark some 1 1/2 miles north of the track most boats take and a bit sheltered from any easterly swells by the shoals (anchor position 25deg 31.49N 078deg 13.98W), in the middle of nowhere with no land in sight - a surreal experience - under a starry sky. Soon after we anchored, S/V Just Imagine and S/V Vespera anchored close by - very comforting to have some company in such an exposed place. After an almost motionless night we raised the anchor at dawn (0600hrs) and motor sailed into the sunrise. Had originally planned to sail to Chub Cay but did not like the look of the anchorages there bearing in mind the squally weather forecast for the coming days .

So we changed course for 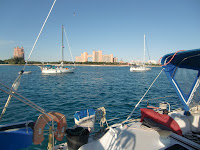 Nassau where we anchored at 1630 hrs on Sun 21 Feb. (anchor position 25deg 04.725N 077deg 19.688W) with the famous Atlantis Hotel in the background. Took 4 attempts to find a place to anchor - first 3 attempts were in an area with thin sand and rocks. Plan to stay here until our son Richard arrives on 1st March.

Have not been ashore yet - rained all day yesterday 22 Feb. Forecast is for rain to stop later this morning 23 Feb.
Posted by dutchlink at 12:47