Please click on photos to enlarge; to resume looking at blog click
browser "go back one page button"


Weather forecast was good so rang Amandio the evening before to collect us from the marina in his taxi at 0630 hrs the next morning.

A glorious sight met us - the mountain tops were golden in the early morning sun, the sky a magnificent shade of blue and a sea of white cloud from the horizon to

the foothills hundreds of metres below us - what a marvelous way to start the day.

The 18 km ridge trail we were about to walk is described as being "one of the big Alpine mountain walks of Madeira". It has a height difference of 530 metres in ascent and 1100 m in descent - all in all quite a challenge for us. 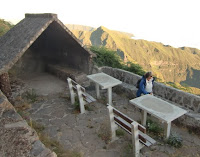 There are several mountain shelters on the first part of the trail. 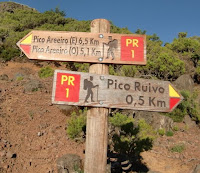 After an hour or so we reached the trail to the summit of Pico Ruivo, which at 1862 metres, is the highest peak on the island. 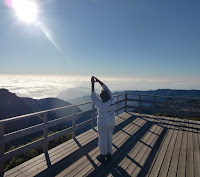 15 minutes later we were at it's terraced summit and enjoyed the panoramic views and J performed her sun salutations. 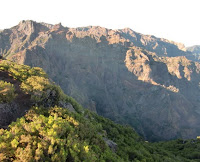 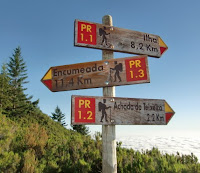 Then back down to the main trail and a coffee at the mountain lodge before continuing.

Unfortunately the description in the trail guide did not match reality and, rather than risk going the wrong way, we back-tracked up the steep winding path for 30 minutes to check that we had not missed a turning - 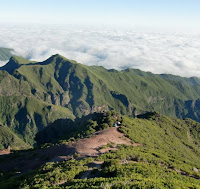 this unfortunately cost us an hour and meant that, as we had to catch a bus at 1600 hrs at the other end of the trail, we did not
have much time to spare.

The trail was a mixture of superbly paved stonework, steep stone steps and sections which were heavily overgrown.

Throughout we had superb mountain views as the trail worked its way up and down the steep sided mountains, crisscrossing from one side to the other of the main ridge. 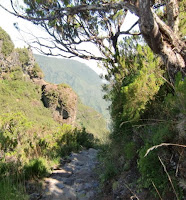 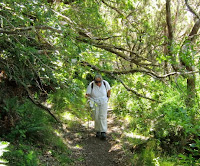 We passed through laurel forests, broom bushes and under pines. 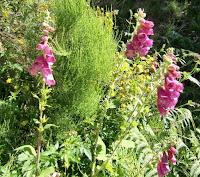 There was often a magnificent floral display including Margaritas, foxgloves,

blue orchids growing on the damp rock faces and other flowers.

There was almost a constant hum of bees harvesting the nectar from the many wild flowers. 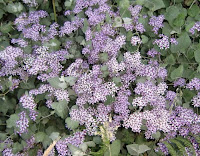 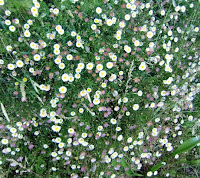 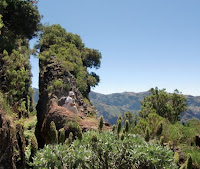 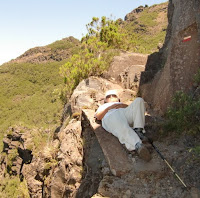 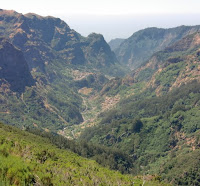 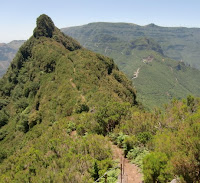 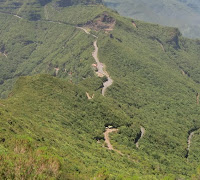 The end is in sight !

We reached the Nr 6 bus stop on the Encumeada pass with just 15 minutes to spare - tired, but exuberant that we had completed this superb mountain hike.

(The bus timetable had said the nr 6 bus to Funchal was due at 16.10 - however it arrived 10 minutes early which could have meant an expensive taxi ride).
Posted by dutchlink at 16:26