Public transport consists of only two bus routes. There is an hourly bus via the town of Vila do Porto to the airport and back, leaving the marina on the half hour. The second route is very infrequent. The bus leaves from the main street opposite the taxi rank and goes via a circuitous route to the north and east of the island. Unfortunately, it only goes twice a day (and not on Sundays), the first bus leaving at 12.40 hrs , the second late in the afternoon and only returns the next morning.

o explore the island one has to either rent a car or combine the bus with the (cheap) taxi service.

During our stay on Santa Maria we made 3 very enjoyable long hikes.

For our first walk, a taxi dropped us off clos 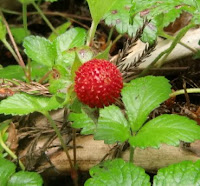 e to the highest point on the island, Pico Alto (587 m) and we walked, mainly downhill, for 14 km to Anjos, a small holiday village on the NW coast where we rang taxi to collect us.

Unfortunately, Pico Alto was in the cloud, so we missed out on the suberb all round view of the island. However, it was a very pleasant walk through Japanese Red Cedar forests , across fields and with superb coastal views.

The trail took us through a strange area called the Barreiro da Faneca or the Red Desert of the Azores, a unique ecosystem made up of reddish clay. 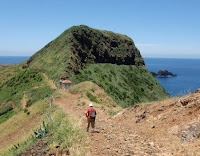 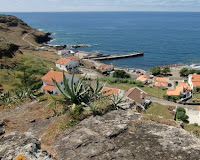 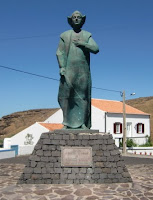 At Anjos there is a statue of Christopher Columbus in front of the site of the church where he is reputed to have prayed in 1493 on his return voyage from discovering North America. (Total taxi cost 18 Euros).

For our second walk, we took the 12.40 bus to the church at Santo Espirito - the bus route zigzags across the island giving one a very good overview of the island which although very small, seems to have two distinct climatic regions dry in the east , moist and green from the Pico Alto hills westward.

After leaving the church in Santo Spirito, the route follows trails through woods and fields 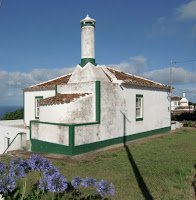 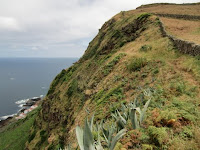 Eventually the trail reaches the top of the cliffs 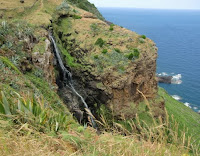 which the small river , Ribeira Aveiro plunges spectacularly down a sheer 200 m drop to a pool below. 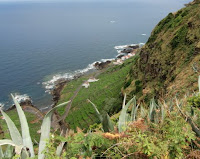 The trail then becomes a narrow stoney path clinging to the cliffside with a 200 m drop on one side - not a place for those suffering from vertigo. 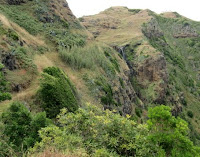 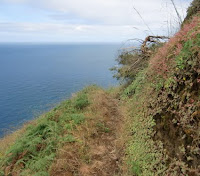 The views were spectacular of the rugged coast line with old black basalt walled vineyard terraces from sealevel up the slopes as far as it had been possible to build them.


At sea level we walke 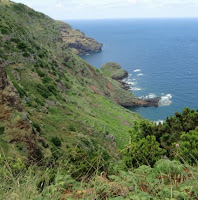 d to the base of the waterfall and then through the very well kept village of Maia . 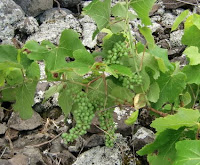 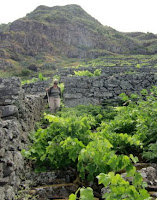 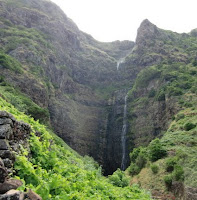 We then followed the road, climbing back to the top of the cliffs and visited the whitewashed Goncalo Velho lighthouse at the SE extremity of the island - named after the islands discoverer Goncalo Velho Cabral. 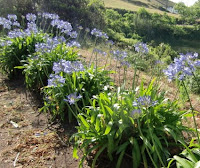 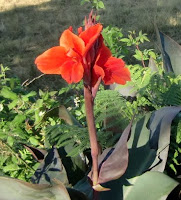 We tried to call our taxi from here but 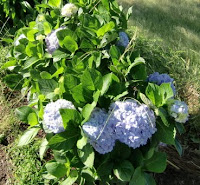 had to walk another 2 kms uphill before we obtained a Mobile phone signal. (It took the taxi 25 minutes to reach us and were charged 14 Euros - for effectively an hour of his time!).

Yesterday (3 July 2010 we were taken on our 3rd walk by Cheila, the young very friendly and helpful English speaking lady from the Marina office, and her boyfriend on a walk 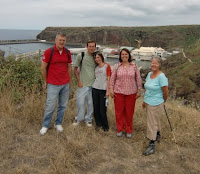 from the marina to some ancient mines in an escarpment close to the cliffs. Antonio ( Chairman of Youth Portuguese Basketball from Lisbon) and his wife Elsa joined us on the walk. 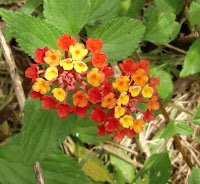 The mine was used in the past to provide the chalk used to make the whitewash for the houses on the island and possibly limestone was quarried here for the mosaics in the streets. Santa Maria is the only island of the group to have sedimentary rocks (limestones and conglomerates)

as well as the volcanic rocks (basalts etc.).

Afterwards we visited the EcoTech museum in the mainstreet of Vila do Porto where we were shown specimens of the local fauna including a stuffed Milhafre (Buteo Buteo Rothschildi or Goshawk in English). Some historians consider the island group is named after this bird which is also known as Acor in Portuguese and is very commonly seen on the islands here and is to be seen on the Azorian Flag.

Tomorrow 5 July 2010 we plan to sail back to Ponto Delgada, Sao Miguel.
Posted by dutchlink at 20:47

Hey Guys, how are you? Miss you a lot, are u going to pass in Santa Maria this summer, i hope so. Kisses and huges. Send email to cheilamelo_17@hotmail.com