We had a very enjoyable time with family and friends in the UK and the Netherlands and arrived back in Las Palmas on 20 September and were very happy to find Dutch Link afloat and looking the same as when we left her.

Since arriving back we have had a pleasant time pottering about the city and doing the odd job on the boat. The first of the 250-odd ARC boats (Atlantic Rally for Cruising boats) have started to arrive in the marina so it is time for us to leave and make room for them.

Our plan is to depart before first light on Monday 4th October and sail/motor the 120 nMile upwind and up current to the most NE-erly island of La Graciosa. Thereafter the plan is to visit all of the 8 major islands in the archipelago, arriving back in Las Palmas by around 10th December, a voyage of around 650 nMiles. 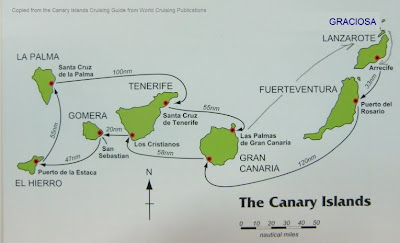 Bearing in mind the prevalent NE-erly wind and the SW-going current, we plan to visit the islands in the following order:-

That is the PLAN - but as we all know , plans are subject to change - particularly on a sailing boat!
Posted by dutchlink at 11:27