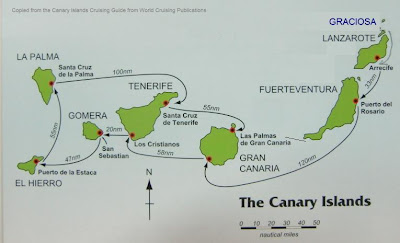 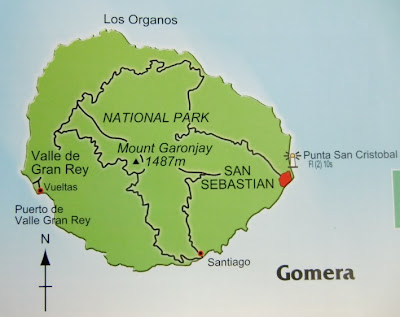 San Sebastian is proving to be a very pleasant place to stay. The marina and town are tucked into a valley surrounded by high cliffs and hills. 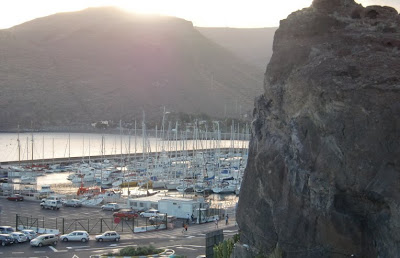 Either side of the marina are black sand beaches with fresh water showers - very convenient for a swim. 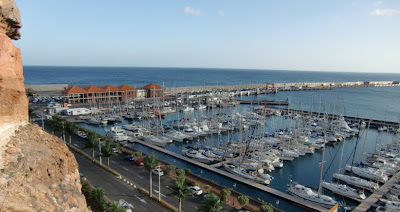 The three ferries which provide a link with Los Cristianos (South Tenerife) three times a day, are just a couple of minutes walk from the marina - very handy for crew changes. 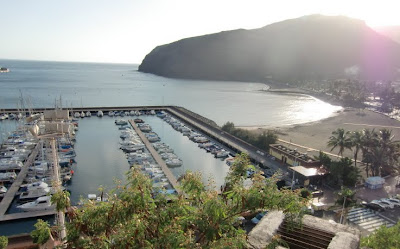 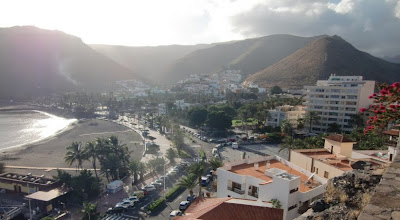 The old town of San Sebastian is very pleasant to walk around - its most important claim to fame is that it was the port from which Christopher Columbus left 0n 6 September 1492 to discover the Americas. These days few sailing boats would dream of making the Atlantic crossing so early the vast majority wait till mid November after the official Hurricane season is over. 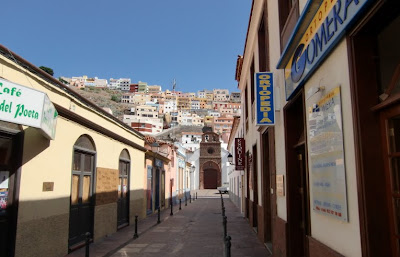 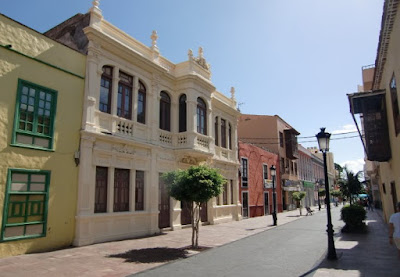 Together with Jeannette's sister Margreet, we made a tour around the island in a rental car. 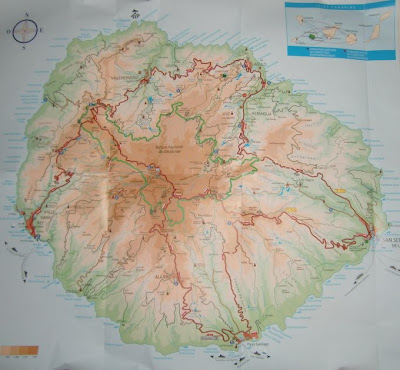 Similar to Madeira, moving around the island was, until the mid 1900s , very slow and difficult due to the mountainous terrain. Communities were very isolated and had to be self sufficient. In order to communicate over longish distances, a "whistle Language" (El Silbo) was practised - the different tones represented certain key words and it is claimed could be heard 4 kms away.
The trip started by visiting the very green mountainous interior which, as it is most of the time, was often in the cloud with a light drizzle and quite cool. The moist trade winds are forced to above 1400 meters (highest peak is 1487 meters) and most of the time water condenses out giving rise to luscious Laurel Forests. This area has become the Garajonay National Park and is one of the world's oldest natural forests - it has been declared a World Heritage Site by UNESCO. 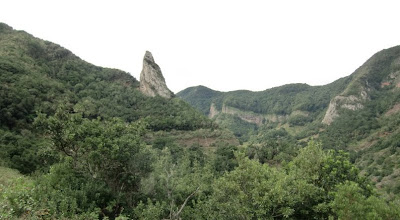 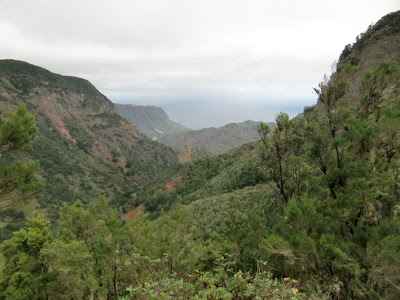 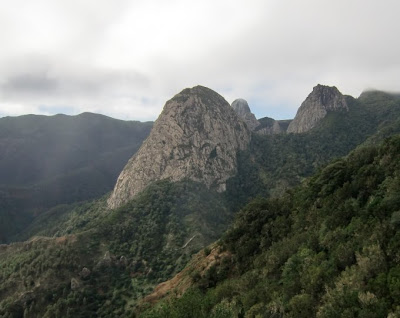 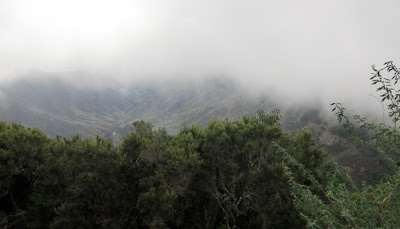 From the National Park we took the road down the Valle Gran Rey to the Puerto de Las Vueltas. As one descended the forest gave way to a more scrub and cactii vegitation. Lower down the valley there was evidence of terraces for growing bananas and other crops intersperced with palm trees. 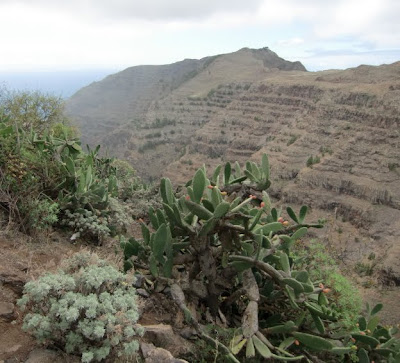 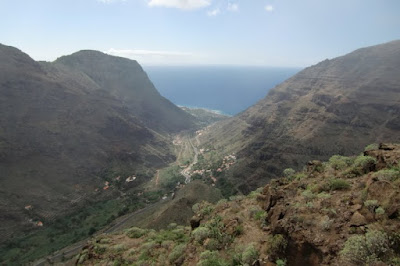 Cesar Manrique of Lanzarote has left his mark here too in the form of a Mirador which has similarities to the one overlooking Graciosa. Unfortunately it was closed when we were there. 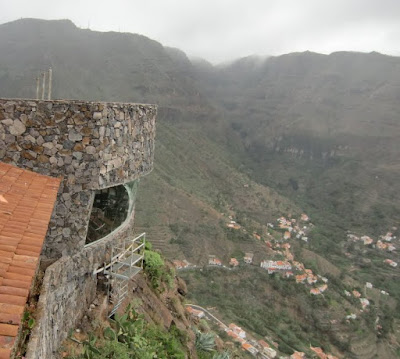 Similar to Madeira, many road tunnels have been built in the last few years, facilitating movement across the island. 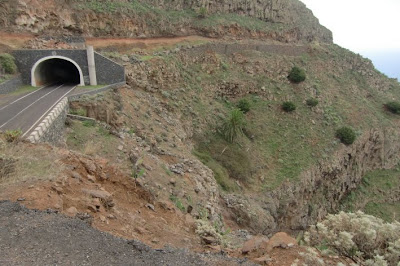 Massive breakwaters protect the ferry port of Vueltas and provide shelter for yachts to anchor under the towering crumbling cliffs. 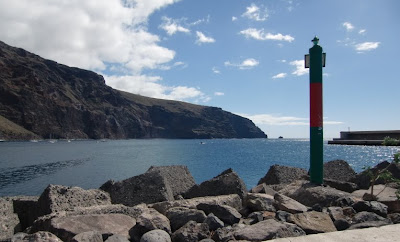 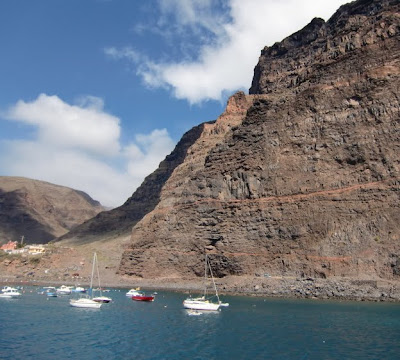 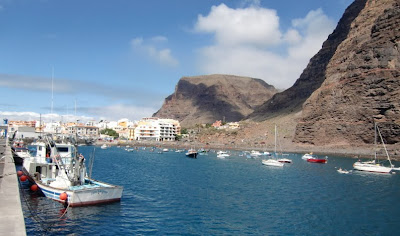 Our trip took us back into the mountains where we stopped to visit the Chorros de Epina - springs above Vallehermosa which are supposed to have magical powers - women must drink from the uneven and men from the even springs starting from the left - otherwise their luck turns negative. 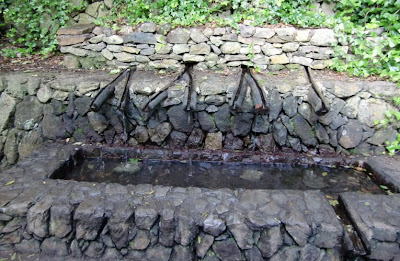 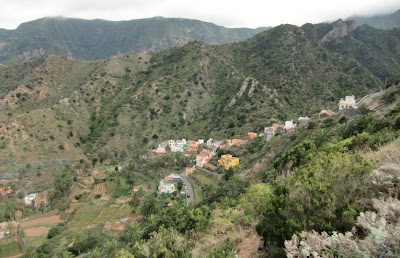 One of the most picturesque villages we visited was the 17th century town of Agulo perched above the sea at the foot of high cliffs with views of Mount Teide on Tenerife. 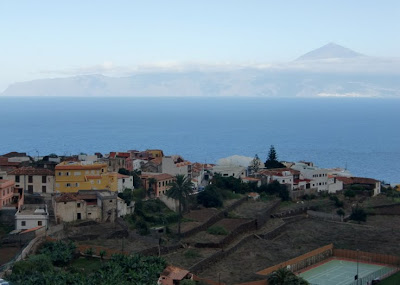 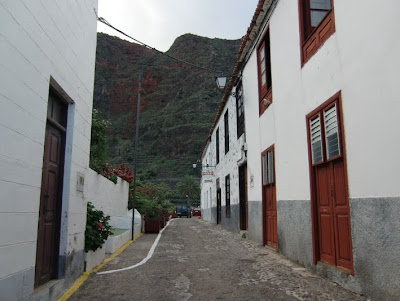 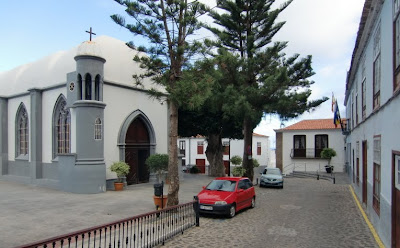 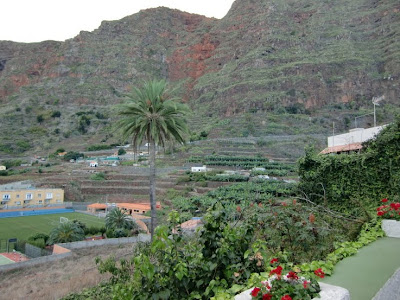 Many Banana plantations surround the village, a hang-glider just happened to descend as we took this photo. 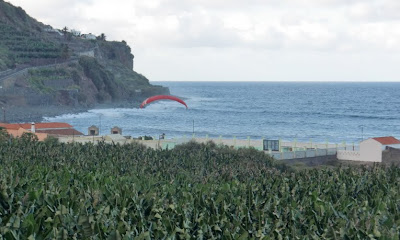 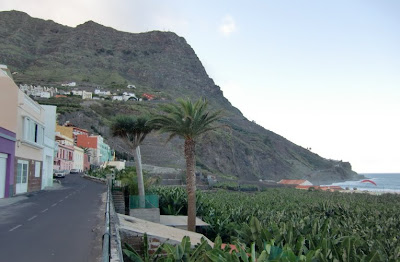 We plan to stay in San Sebastian till Friday 5th November when the current forecast is for the wind to shift to the east facilitating our planned sail to La Palma.
Posted by dutchlink at 21:20