Spent several hours yesterday removing damaged mainsail from mast and boom. Today took the sail to Tomas, the resident sailmaker in San Sebastian.
For some reason the song of Molley Malone came into my head as I wheeled the mainsail in the marina's wheelbarrow through the streets broad and narrow of San Sebastian! 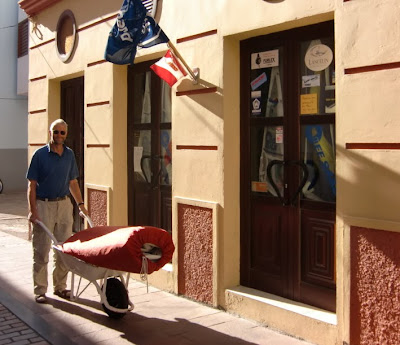 Tomas the sailmaker took one look and declared the sail to be "dead" . After asking if I wanted him to demonstrate what he meant, he gripped the sail in two hands and almost effortlessly tore a part of the sail - thinking of our not so long ago Atlantic crossing sent a couple of shivers down the spine.
The sail is in its 11th season and has been exposed to the sun's merciless rays for many many months so it was not such a surprise. However, it was a very special sail made by a very good sailmaker in Les Sables d'Olonne , Olivier Tarot , following the recommendations of the Dashwoods , makers of the Deerfoot long distance cruising yachts in their Cruising Encyclopedia. The sail still looked OK but I never thought of carrying out the sailmaker's destructive test!
Plan now is for Tomas to make a temporary repair to the mainsail today so we can use it , with caution. Meanwhile he is arranging for a new mainsail to be made by Lee Sails in Hong Kong with whom he has some sort of long term arrangement.

The new sail should be in San Sebastian well before Xmas. We then need to give the sailmaker our old sail for him to transfer some of the fittings which are still good.
Plan is to sail back from Las Palmas, where we will leave the boat over Xmas, early in the New Year for Tomas to do this.


Noticed the very ornate manhole covers in the street in which the sailmaker has his shop. 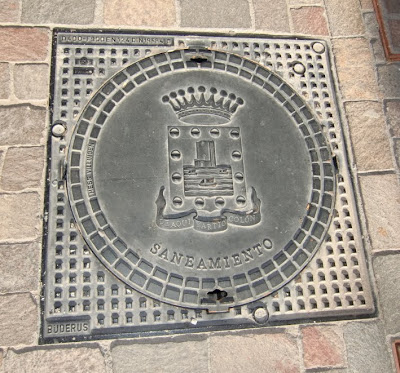 After staring at the Spanish words underneath the coat of arms for a while, realised that even the manhole covers were reminding us that ""From Here Left Colon (ie. Christopher Columbus)" a nice touch.