Left San Sebastian on La Gomera at the crack of dawn this morning (0700 hrs 11/11) and motored all the 50 nMiles to La Palma without incident, without enough wind to sail and without catching a fish.

Although the wind was light, the northerly swell was 1 to 3 meters so it was quite a rolly trip. Unlike the first time we attempted this trip 5 days ago when we had current with us , this time there was a strong ebb against us between La Gomera and Tenerife and we were only making 3.5 knots SOG. As we rounded the north of La Gomera, the current eased off and with some genny out we motored at 6 to 7 knots SOG the rest of the way.

The visibility was quite amazing. La Palma was visible as soon as we reached the north of La Gomera - almost 50 nmiles away. The top half of the over 2000 m high island (highest point 2426m) was covered in cloud. 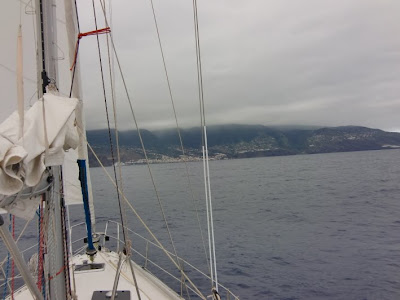 Had to wait for the cruise ship Voyager of the Seas to leave before we could enter the harbour (around 1600 hours). 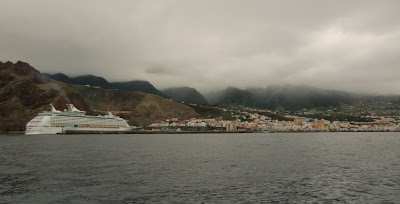 As we were calling the marina on VHF, our old friends Alberto and Patrick from the Argentinian yacht Louanjo called us up - last seen in Horta on Faial in the Azores. Unfortunately they are leaving early tomorrow so only managed a brief chat.

There is quite a surge in the marina but the very friendly marina staff allocated us one of the least swell affected berths in the NE of the marina.

First impressions are that this is one of the greenest islands we have seen in the Canaries so far. 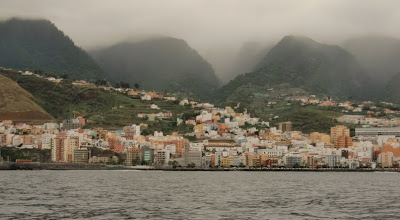 Wifi is a disappointment - so far have not been able to connect to the marina wifi which we understood was supposed to be very good.
Posted by dutchlink at 20:39