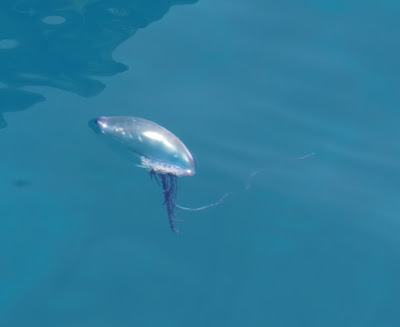 One of the delights of anchoring compared to being in a marina is that we swim most days from the boat. Most of the time, there is nothing around to bother one, however, from time to time we see a few Portuguese Men o War sailing past. 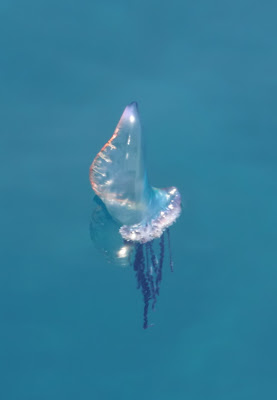 As the sting from their many meters long tentacles can be quite severe, we keep a close lookout when swimming. 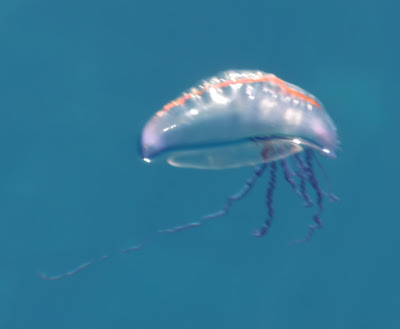 These photos were taken today of one of them which sailed a few meters from Dutch Link. 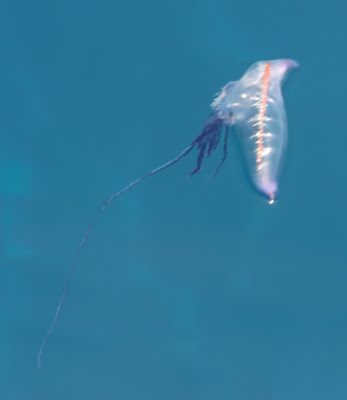 The first time we encountered a lot of these animals was in Bermuda, then on Miami Beach and in the Bahamas. We also saw many in the seas around the Azores.

Wikipedia has this to say about them:-

The Portuguese Man o' War (Physalia physalis), also known as the Portuguese man-of-war, man-of-war, or bluebottle, is a jelly-like marine invertebrate of the family Physaliidae. The name "man-of-war" is borrowed from the man-of-war, a 16th century English armed sailing ship.
Despite its outward appearance, the Man o' War is not a true jellyfish but a siphonophore, which differ from jellyfish in that they are not actually a single creature, but a colonial organism made up of many minute individuals called zooids.[1] Each of these zooids is highly-specialized and, although structurally similar to other solitary animals, are attached to each other and physiologically integrated to the extent that they are incapable of independent survival.
The Man o' War is found in warm water seas floating on the surface of open ocean, its air bladder keeping it afloat and acting as a sail while the rest of the organism hangs below the surface. It has no means of self-propulsion and is entirely dependent on winds, currents, and tides. It is most common in the tropical and subtropical regions of the Pacific and Indian oceans, but can drift outside of this range on warm currents such as the Atlantic Gulf Stream. unquote