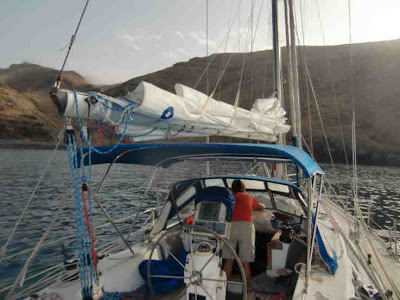 After installing the new mainsail, we left the San Sebastian Marina at 1600hrs and motored a few miles south to Playa de Oraja where we had a welcome swim and anchored for the night 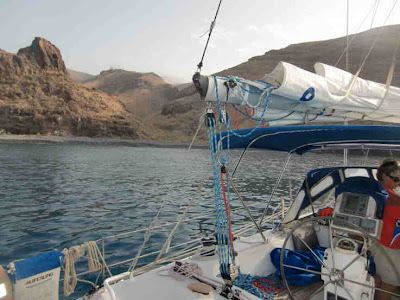 At 0920 the next morning, 23 June, we left the anchorage and raised our new mainsail - gleaming white in the morning sun. The weather forecast was for a light northerly and as there was hardly any wind we had the full mainsail up. Very soon we started to see the occasional white horse but still very little wind. Then without further warning the wind speed shot up to 30 knots and the waves suddenly increased - we were yet again caught out by the infamous acceleration zone. Hastily put two reefs in the main (found had not threaded the leech block properly, but luckily was still useable) 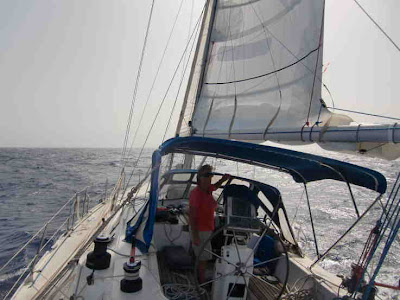 and unfurled a tiny mount of Genny 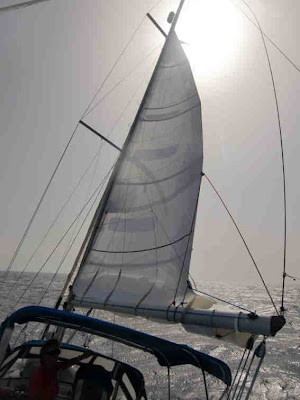 Once we had the sails set properly, we had an exciting fine to beam reach to Tenerife in the mainly NNW wind - a very good test for our new heavily reinforced mainsail.


After an hour or so the wind gradually lessened and, 5 miles off the Tenerife coast we had to start the engine. 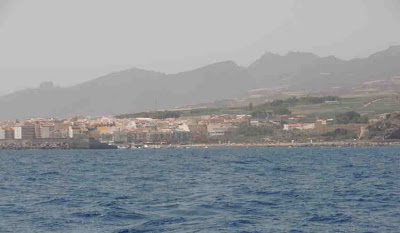 Anchored off the fishing port of San Juan on the west coast of Tenerife and had a swim. Had intended to spend the night here but did not trust the anchor holding , especially with a forecast increase in wind strength. 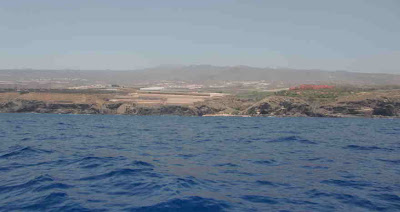 So raised the anchor and motored south past covered banana plantations and lots of tourist developments. 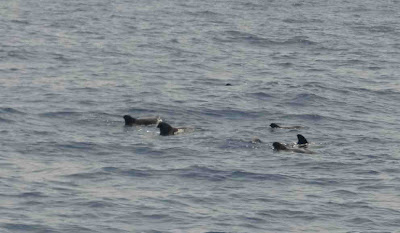 We were entertained by several pods of Pilot Whales which swam lazily close to us.

Moored in Marina del Sur, Las Galletas by 1900 hrs in berth 70 on pontoon 4 which has finger berths. There is a considerable surge in the marina - memories of El Hierro - but the fingers are more substantial and hopefully will be strong enough to withstand the lurching movements of Dutch Link.

Had a stroll along the narrow beach inside the harbour - crowded with people till late at night most of whom were barbequing and having fun. Came across a group of musicians playing Spanish songs on various types of guitar and an accordian - very pleasant to listen to. It was the San Juan Fiesta.
Posted by dutchlink at 12:00