Dinghied into the Vueltas harbour at 0745 hrs on 29 June to catch the 0800 Line 1 bus to Chipude. This is the first time we had taken the early bus and we were surprised that the bus was almost full. 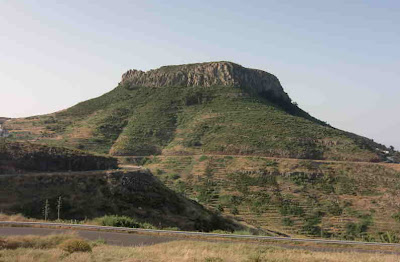 From Chipude (1080 meters) we could clearly see our first objective (Rother's route nr 15), the Tabletop mountain of Fortaleza (1243 meters). This hill was once an important ritual site for the Guanches. It is only accessible via a steep scramble from the coll (to the left in the above picture). 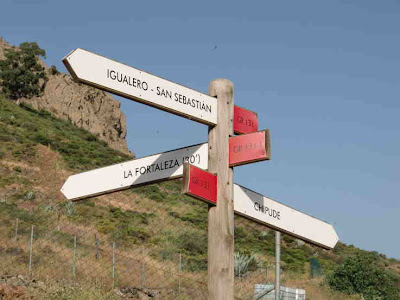 The start of the steep scramble to the top 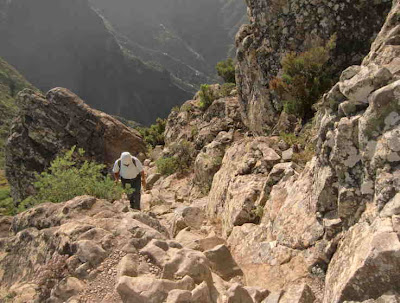 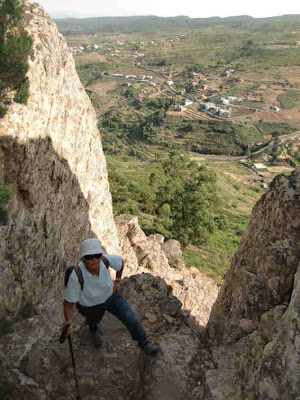 Once on top, we had superb views 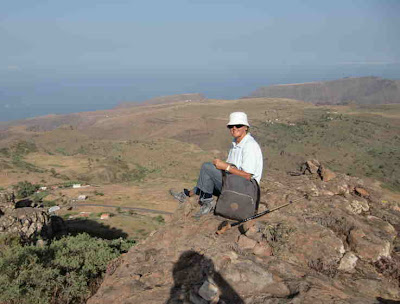 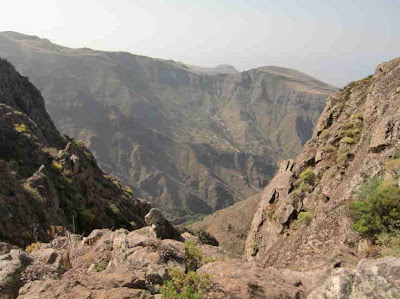 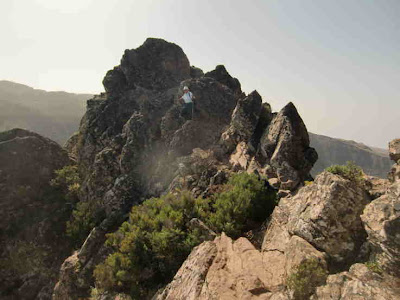 By 11.00hrs we were at the bottom of the hill, and continued on Rother's route nr 16 to the small hamlet of Igualero. 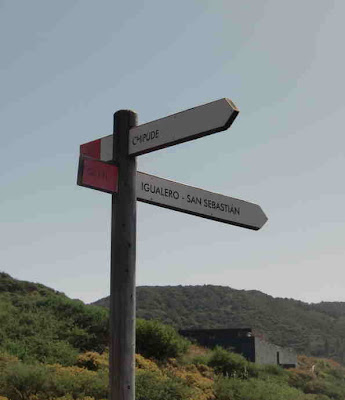 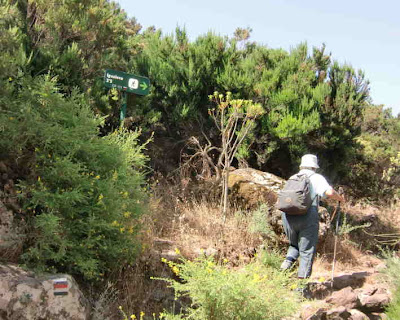 For the first hour or so we had superb views Fortaleza 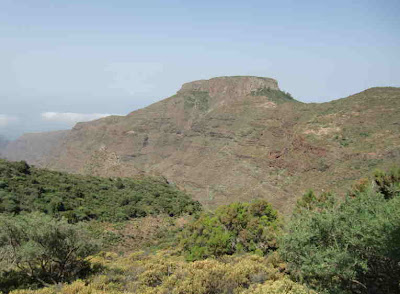 and of the Barranco of Erque 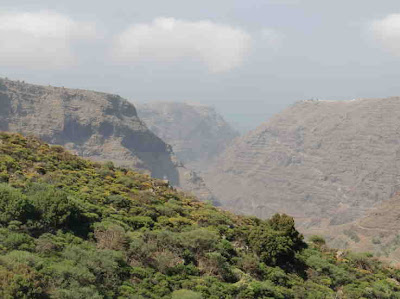 The path was wide as it traversed the hillside just under the edge of the pine forests of the National Park. 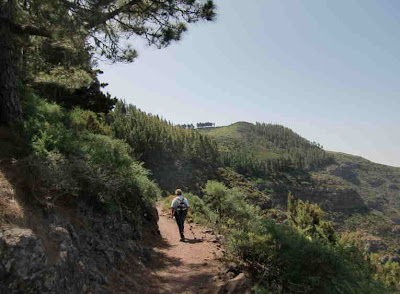 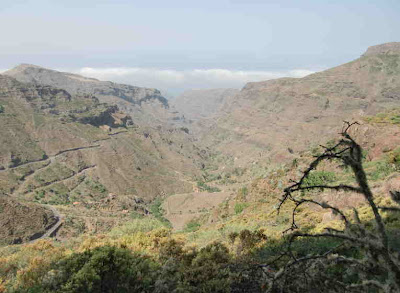 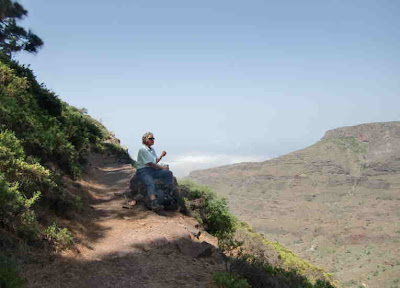 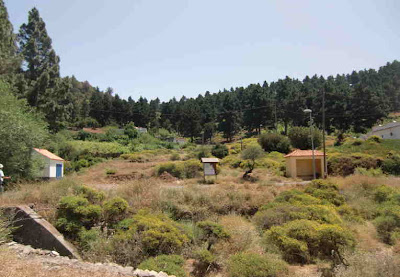 From here the route was supposed to go through a pine forest - however recent logging had left only a few trees standing. The logging was probably part of a project to replace non indigenous with indigenous plant species. 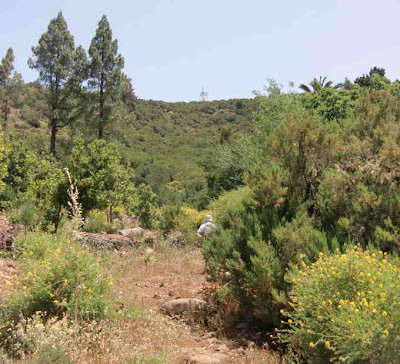 By 13.30hrs we reached our second objective, the summit of Garajonay (1487 meters above sea level), the highest peak on the island. 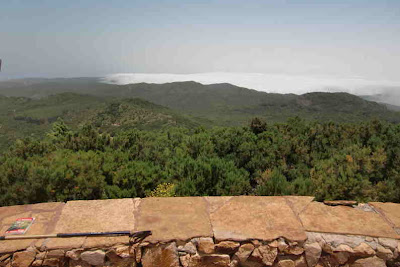 We were very lucky to have fairly good visibility - although cloud prevented us from seeing the neighbouring islands of Tenerife, El Hierro and La Palma 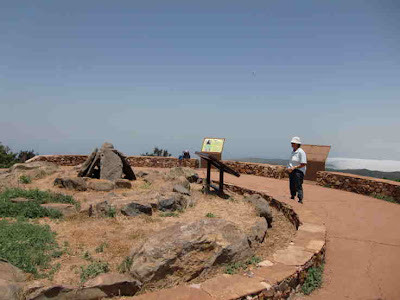 The peak of Garajonay was a ritual site for the Guanches - a reconstruction of this has been made. 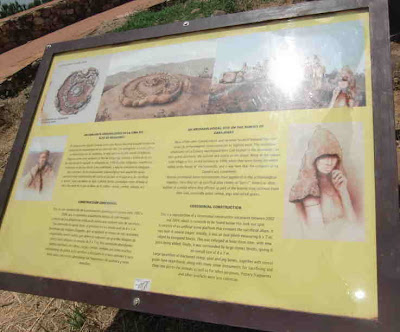 Fortaleza was clearly visible - hard to imagine we were on its summit just 1 hr 45 minutes previously. 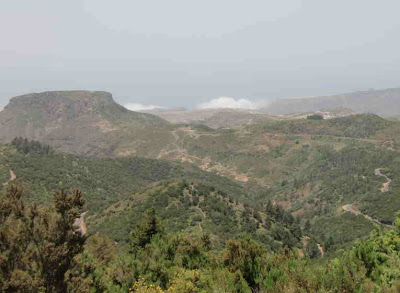 Looking back at Garajonay on our way down - the peak does not look that impressive. To the right are communication towers on its secondary peak. 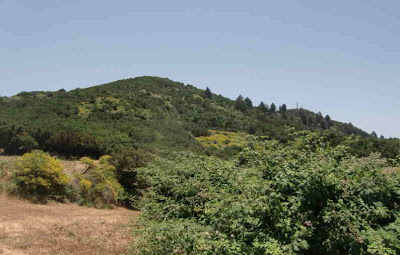 The route back to Chipude followed forestry tracks. At several intersections there was no indication which was the correct route. At one point , this vineyard owner called out to us that we had taken a wrong turning. However, what he really wanted to do was sell us some of his wine - after sampling at his "bar" 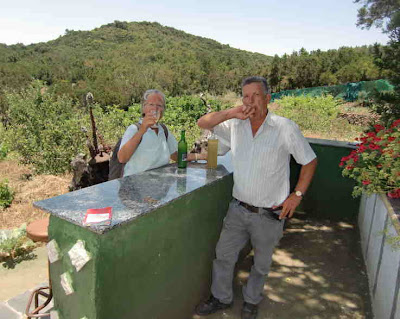 After discussing the route with him we found that the route we had been on was actually the correct one - he was proposing a quicker route but over the road. The route continued past many well kept terraces full of vines which where just starting to produce grapes. 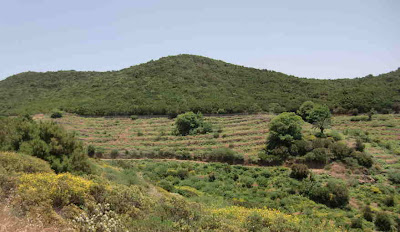 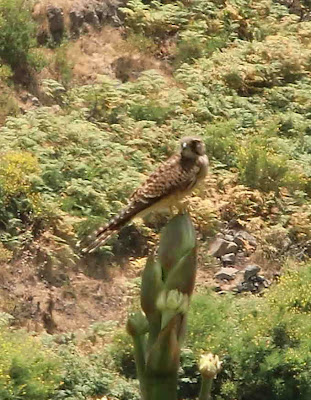 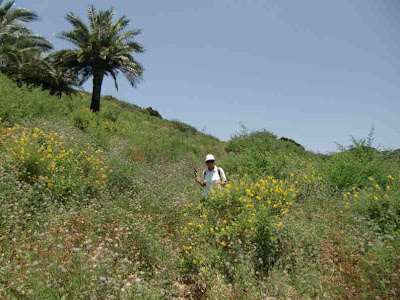 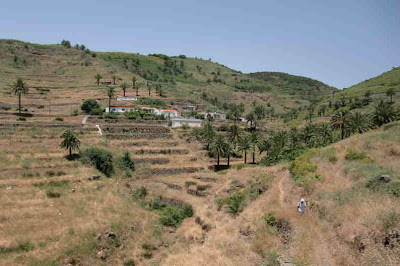 Over a low ridge, our start and end destination, Chipude came into view 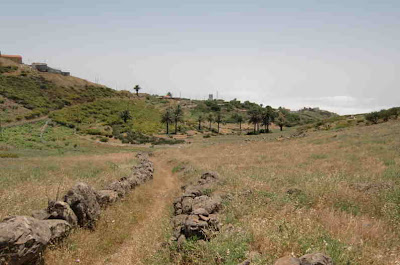