A check on the latest Grib File download late afternoon 5 July confirmed that conditions were probably as good as we were going to get for our planned trip to the Azores. 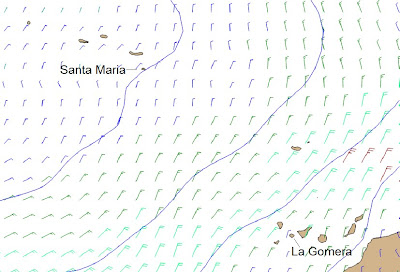 So at 21.35 5 July, just before nightfall we raised anchor and left our wonderful anchorage off Vueltas, Valle Gran Rey on the SW coast of La Gomera. With two reefs in the mainsail we motored in the dark in very little wind northwards along the coast.

As we came out of the lee of the island, we soon entered acceleration zone off west coast of La Gomera and had gusts over 30 kts NNE. After a couple of hours the wind reduced to the mid 20's knots. Then around 0300hrs 6 July we entered the acceleration zone off southern tip La Palma - again over 30 kts. Once we rounded the southern tip, Pta Fuencaliente, we motored up the western coast in the lee of La Palma. 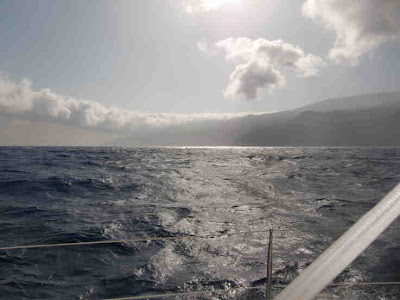 At 1000hrs we entered our 3rd acceleration zone at northern end of La Palma. After a couple of hours the wind reduced to a NEerly 20 to 25 kts and we continued sailing with 2 reefs and small genny with the auto pilot set on wind vane at 60deg to the apparent wind in lumpy 2 to 3 meter waves. 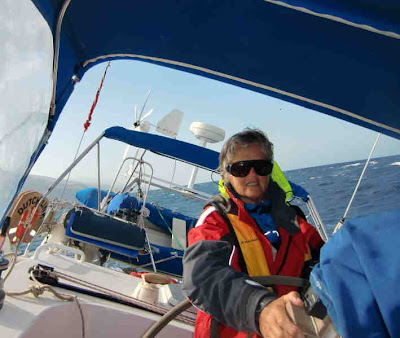 Please click on arrow to play below video clip

Our new mainsail with two reefs in 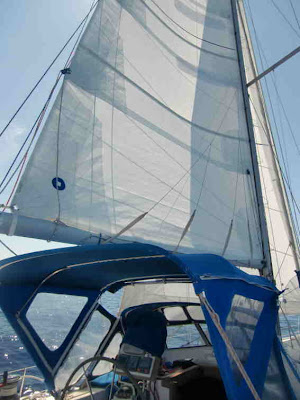 On 7 July at around 1300 hrs wind suddenly dropped from over 20 knots to almost calm so we motored a while. After an hour the wind picked up again to over 20 kts , gusting 30kts. Sailing in such conditions with biggish seas breaking over the boat - some coming over the sprayhood top into the cockpit with the boat all the time heeled over was not very enjoyable - more just hang-in-there weather. We took half a seasickness pill every 6 or so hours for the first few days as a precaution- as a side benefit the tablets made us quite sleepy so no problem with sleeping. Jeannette has yet again done a remarkable job throughout the passage providing very good meals in the most trying conditions with Dutch Link bouncing around at a considerable angle of heel.

8 July wind NE 5 up to midday then dropped to 15 kts but increased again with gusts up to 25 kts as went under darker clouds - very difficult to decide how much genny to let out.

At 1600 hours the skies cleared and we enjoyed a few hours of sailing in the sun with much reduced waves and even took out second reef , sailing with just one reef in mainsail. The skies clouded over as night fell. 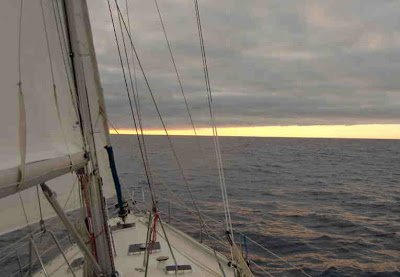 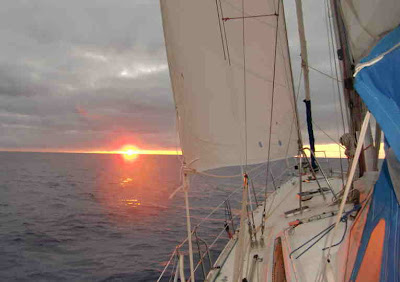 Grib files downloaded with the aid of our Iridium Satellite phone showed a decreasing wind which would head us more and more as we got closer to the Azores High. At this stage it looked as though we could be motoring for the last 1 to 2 days. 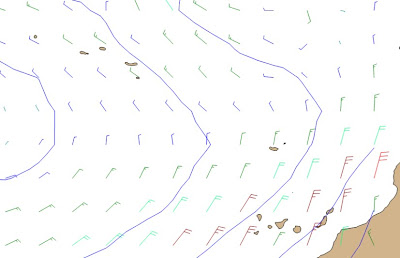 Wind dropped at 0730hrs 9 July to a whisper so motored for an hour. Wind then picked up to a NE 3 and stayed at this level all day gradually going to NNE. Only high clouds seen all day and some sun. Finally took out the last reef and hardened up to 40 degrees to apparent wind. We spent the day gliding along in almost calm seas at 3 to 4 kts SOG - very pleasant. 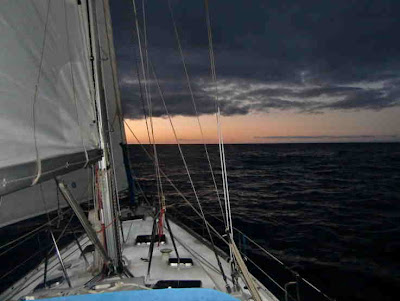 Had a very pleasant night sail with clear star filled skies much of the time and a good half moon till 0200 hrs. At 0715 10 July wind died and motored for a couple of hours. The wind then picked up from the NW as forecast and we sailed since then on a Port tack heading at times almost due north. Wind picked up during the day to a WNW 5 so back in went the two reefs. 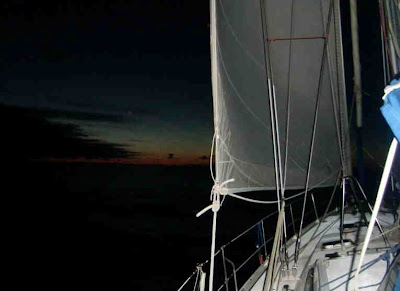 Same photo but with no flash 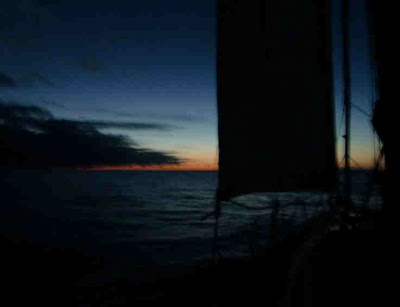 Headed North all night in a WNW 5 then at 0810 hrs 11 July, as wind eased off a bit, took the opportunity to charge the batteries by motoring for an hour directly into the wind towards the Azores.

At 1030hrs had a massive windshift enabling us to sail a course directly to the Azores. Downloaded more grib files via our Iridium Satellite phone which confirmed previous forecasts showing that wind would veer further during the day to the NE allowing us to sail more and more freely. 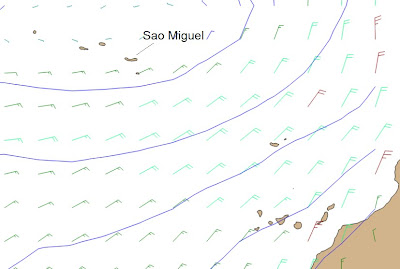 Based on this forecast and timing, we decided to change our destination from Santa Maria to Ponta Delgada on Sao Miguel. 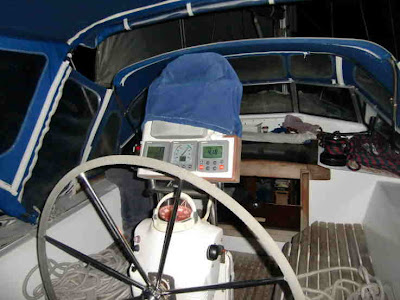 AIS has again proved its worth - 5 ships have passed within a couple of miles, three of which we called up to make sure they had seen us. AIS alerted us when they were 8 miles off. The ship below is the MSC Ukraine, which altered course for us after a chat on VHF 16 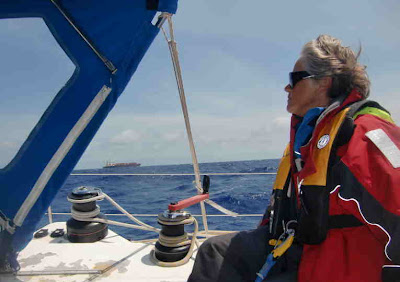 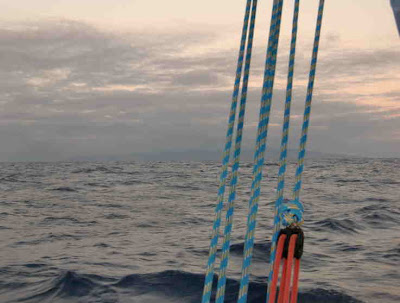 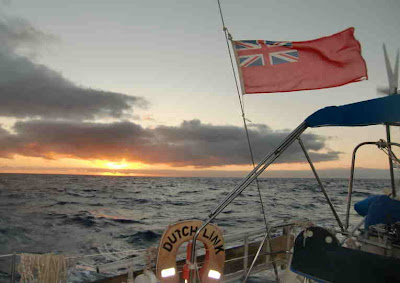 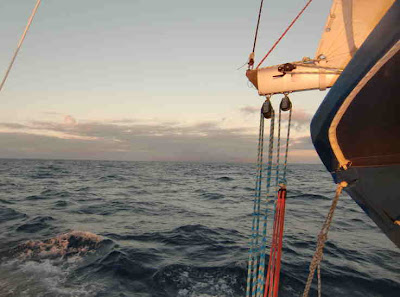 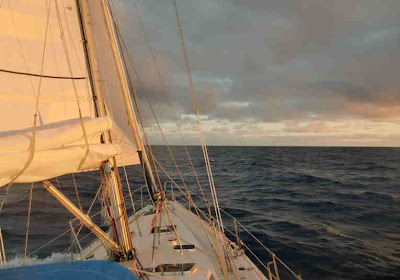 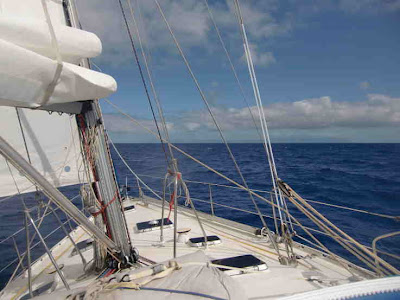 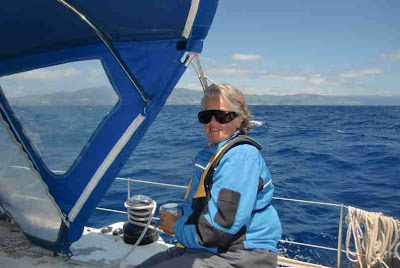 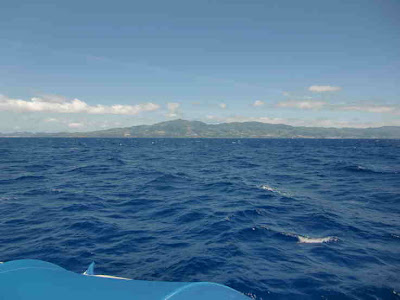 Made it to the Azores - Dutch Link safely moored in Ponta Delgada Marina, Sao Miguel by 1800 hrs 12 July - a very happy crew. We have been amazed at how accurate the Grib files have been in terms of wind direction and timing of windshifts. One has to add 5 to 10 knots to the forecast wind speed, however - a predicted force 4 is more likely to be a 5/6 Beaufiort. 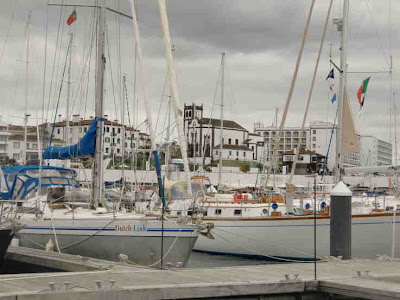 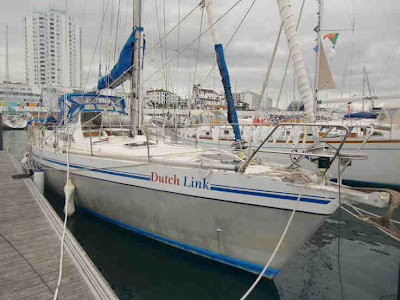 Plan to stay in the Azores for around 2 months and then return to the Canaries for the winter via Madeira.