The grib files indicated that Monday 24 October would be a good day to start our 470 nautical mile trip from Santa Maria in the Azores to Madeira. A depression would have moved to the east of us by 0300 hrs in the morning leaving a nice Northerly 4 to 5 Bft - perfect for making a South Easterly course. 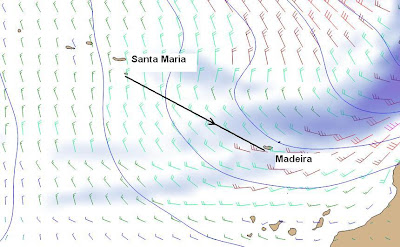 So we were up at 0330hrs and by 0500hrs we cast off our mooring lines and headed out into the pitch black night - no moon as it was more or less New Moon. By 0730 we were well clear of the island which was becoming more and more visible as the day broke. 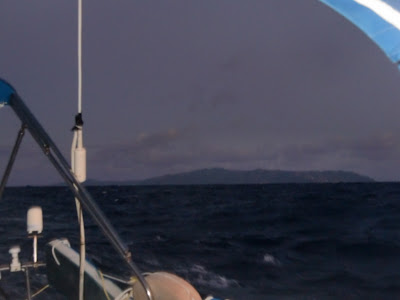 Had a very pleasant broad reach in the promised 4 to 5 Bft northerly wind making 5 to 7 knots, occassionally 8 knots in the 20 + knot gusts. The skies were partly cloudy and seas lumpy enough to give us a bit of a roll. 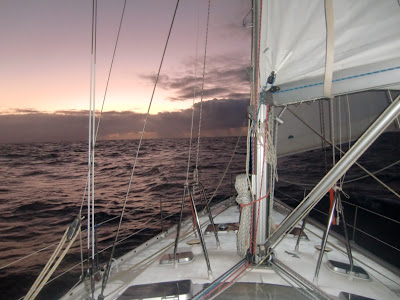 We kept the wind till the early hours of Tuesday morning when the wind started to die. Speed dropped till we were making only 2 knots. We were sailing with two reefs in the mainsail so we could have shaken out a reef . However, as the forecast was for much stronger wind to come, we decided to motor for a few hours and recharge the batteries.
After 3 1/2 hours motoring, the wind picked up again so motor off and sailing, this time broad reaching on Starboard tack in a westerly 4 to 5 Bft wind.

The grib files we had downloaded before we left had indicated that we would catch the southern edge of a depression which would give us winds of around 27 knots by 0300 hrs on Wednesday night, therafter reducing and coming round once more to the North - by now a familiar pattern in the Azores 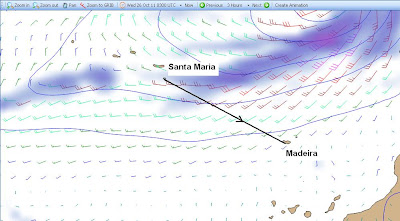 By 1300hrs on Tuesday the wind was already gusting 6 Bft from the WestSouthWest, somewhat earlier than expected. Furled in more Genny as the gusts became more frequent, the barometer started falling and the seas became lumpier - the predicted approaching depression seemed to be ahead of schedule. Downloaded an update on the gribfiles via our Iridium Satelite phone, indeed the depression had speeded up somewhat and was predicted to come further south to well below our track. 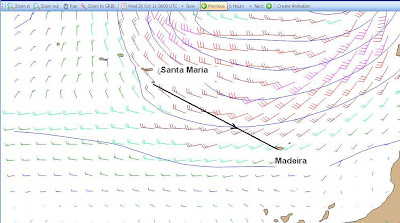 The night of Tuesday/ Wednesday became a wild sleighride. The predicted increase  in height of the NWerly swell to over 4 meters materialised while the SWS wind increased to good a 7 Bft creating  a confused sea with breaking waves. Dutch Link behaved admirably surging down the waves in the black night with the speed regularly around 8 knots, touching 10 knots from time to time. The wind continued gusting well over 30 knots until Wednesday afternoon when it started to lessen and veer to the North West as the depression moved north east to Europe. 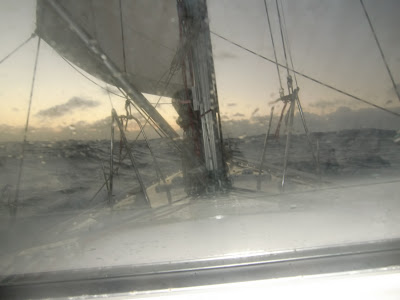 By late Wednesday afternoon the wind was down to a brisk but pleasant NW 5 Bft and everything seemed much more friendly. 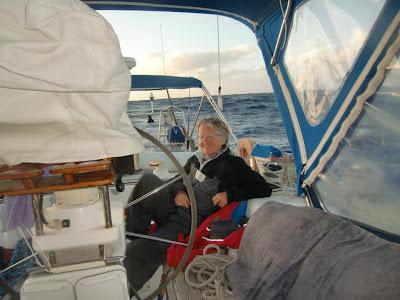 As we were by now running, we poled out the Genny onto port and sailed goose winged 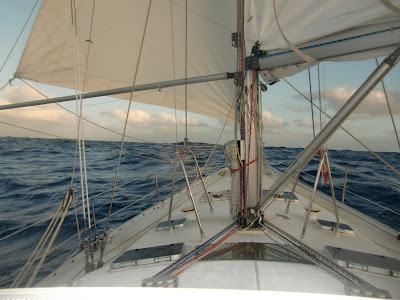 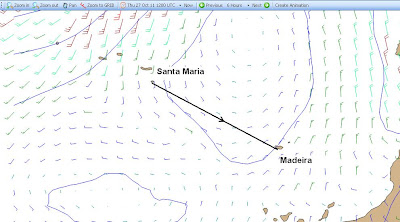 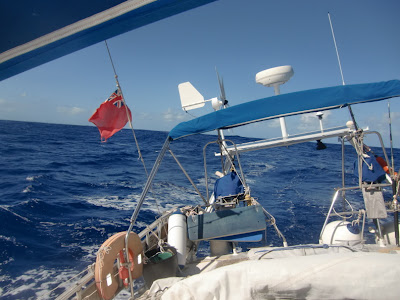 Already some 40 nmiles off Madeira we started to see the high island on the horizon.
Some 25 miles off we took this photo 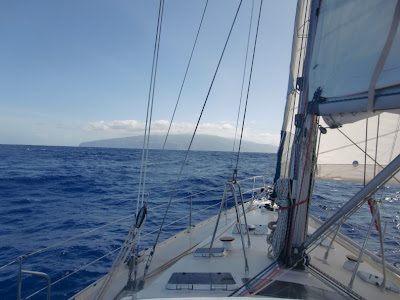 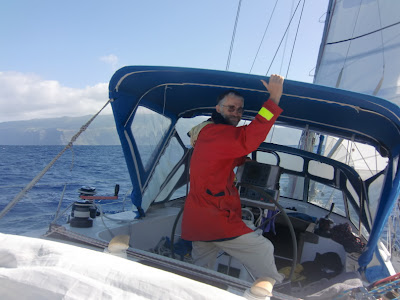 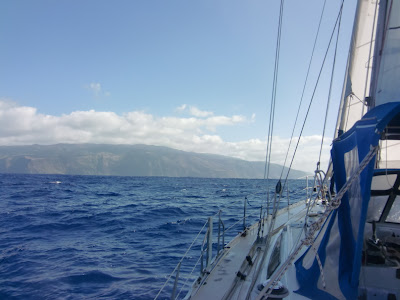 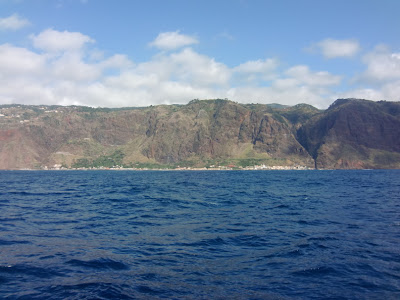 At 14.30hrs we make our approach to Calheta, the narrow entrance not being very obvious from the sea 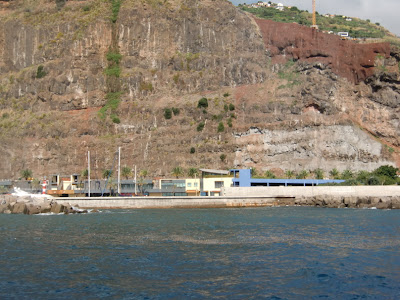 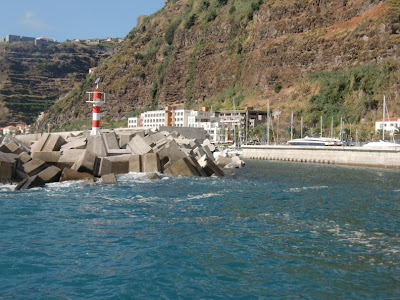 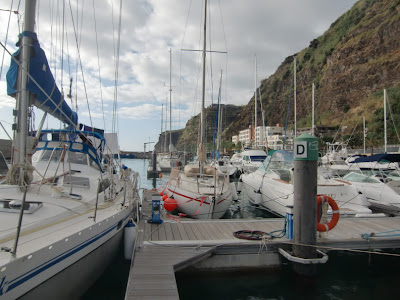 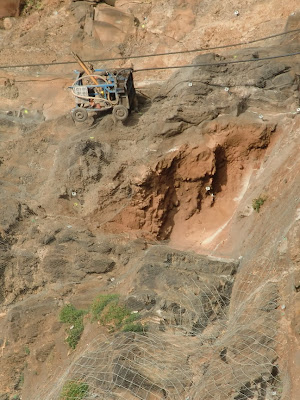 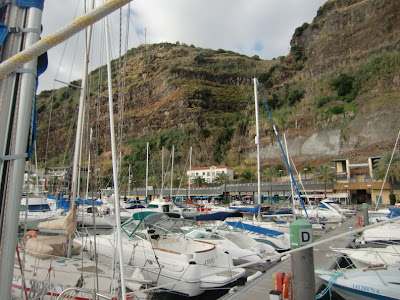 After washing down the boat and tidying up, we went for a refreshing swim from the beach adjacent to the marina - very good especially as we had not showered or had a change of clothes for 3 1/2 days!
In the evening we went to the Dutch owned marine side restaurant at the end of our pontoon, the Blue Marlin for a very pleasant celebratory meal - catching up on emails, via the cafe's Wifi, between courses.
Posted by dutchlink at 20:28