At 1600 hrs on 26 June 2010, the low clouds had lifted and we made a spontaneous decision to leave Angra. We had been debating when to leave for some time - on the one hand this was the only chance of enough wind to sail for several days, on the other the forecasts indicated a rainy trip. At 1700 hrs we cast off and had a good sail to Vila do Porto on the island of Santa Maria arriving at 1930 the next evening, having to motor for only 6 of the 26 hour 145 nmile trip. 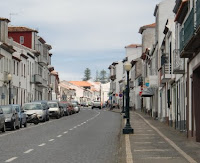 dly harbourmaster Amando plus other sailors helped us to moor in the marina.
The marina is a welcome change from Angra as there is absolutely no surge here.
The town is situated on top of a hill with a very long straight main street climbing steadily even higher.

Several of the buildings are quite ornate but there are several facades of ruins particularly at the lower end of town. We understand that the population has declined from over 13,000 in 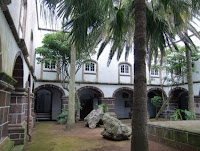 1960 to less than 6,000 in 2001 - mainly due to emigration to North America and other parts of Portugal, leaving many houses vacant. 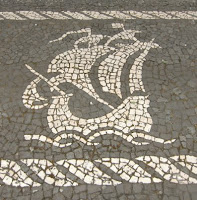 and mosaics of ships, dolphins and conches in white limestone - very ornate. 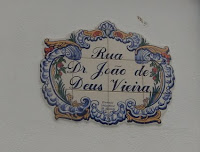 Most of the street names are given in the form of tiles, similar to on the other islands and in mainland Portugal.


Many historians consider that Santa Maria was the first of the Azorian islands on which Portuguese sailors came ashore - thought to be somewhere between 1427 and 1432. The sailors had been sent by Prince Henry the Navigator. Vila do Porto is the first settlement in the Azores to have been given a town charter
Posted by dutchlink at 20:31

What a beautiful Blog :)