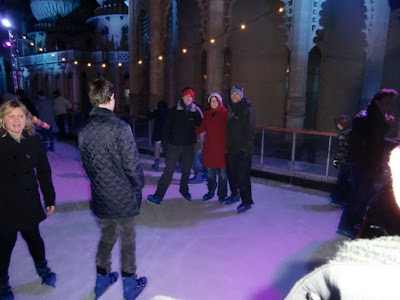 Unfortunately, after 45 minutes enjoying the realisation that could still more or less remember how to skate, a collision with another skater resulted in Mike falling to the ice and instantly changed our plans for the next few months.
An Xray at the Royal Sussex County Hospital confirmed a Distal Radius Fracture with displacement of Mike's right wrist. 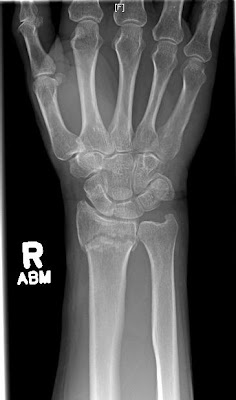 The duty doctor injected the damage area with 10 mls Lignocaine/M.. local anaesthetic (a Haematoma Block) and after 15 minutes, tried to reset the radius by pulling on my fingers while another doctor pulled my upper arm. After hearing a couple of clicks, a nurse put a plaster cast on my wrist , tension being applied until the plaster had set.
Unfortunately, a second Xray showed that the attempt to manipulate the wrist had not been successful.
As there was no chance of further treatment in the UK till 4 January due to the holidays, we made a decision to return ASAP to Las Palmas to have the follow up treatment done there. This unfortunately ment cancelling visits to several of our friends - we are very sorry to have had to cancel.
1st January saw us on the Easyjet flight from Gatwick to Las Palmas. We were asked several times by airline staff whether or not the cast was split including on entering the plane - presumeably we would not be allowed to fly if the cast is not split in view of the risk of deep vein thrombosis.
We contacted the Clinica San Roque at 0830 Monday 3 January. By 1400hours Mike was on the operating table under general anaesthetic in the capable hands of surgeon Dr D I Siva Rossi. By 1800 hrs we were back on Dutch Link with two steel pins holding the fractured parts together - Dr Silva had managed to drill and insert the pins without having to cut the skin - very clever.
A control Xray today 5 January thankfully confirmed that the joint is still correctly pinned. 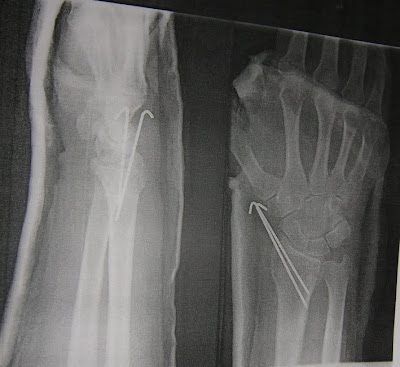 The two white lines on the Xrays are the pins.
Not having the use of one's right hand when righthanded is an interesting experience - to start with one needs assistance with the simplest things - as time goes by alternative ways of doing things are found.
All being well, the plan is to remove the plaster cast and the pins in 6 weeks time on 22 February - after which Mike has a lot of washing up to catchup on!
Posted by dutchlink at 22:46