This Blog is dedicated to Colin 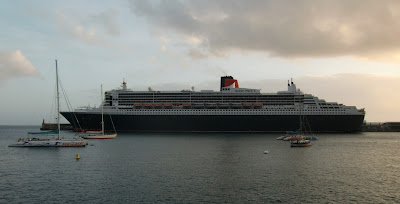 Cunard took delivery in Southampton, England on 26 December 2003. On 8 January 2004, the liner was named by her namesake's granddaughter, Queen Elizabeth II.[16][17] (Wikipedia) 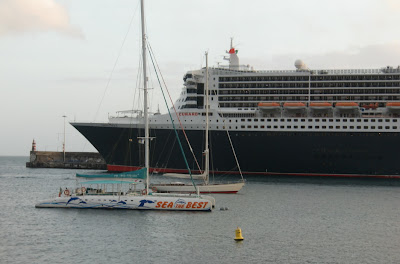 The below information is taken straight from Wikipedia :-
Power plant and propulsion systemQueen Mary 2's power plant comprises both four sixteen cylinder Wärtsilä 16V46CR EnviroEngine marine diesel engines generating a combined 67,200 kW (90,100 hp) at 514 rpm, as well as two General Electric LM2500+ gas turbines which together provide a further 50,000 kW (67,000 hp). Such a combined arrangement, known as CODLAG (Combined Diesel Electric And Gas turbine), provides for economical cruising at low speed combined with an ability to sustain much higher speeds when required, and has been common in naval vessels for some time.[11] While Queen Mary 2 is the first passenger ship to feature CODLAG propulsion, the first major passenger vessel to be powered by gas turbines was the Finnish ferry Finnjet in 1977.[39]
Thrust is provided by four Rolls-Royce Mermaid podded propulsion units, each featuring one forward-facing low-vibration Kamewa propeller with separately bolted blades. The forward pair are fixed, but the aft pair can rotate through 360°, removing the need for a rudder.[11] The Queen Mary 2 is the first quadruple propeller passenger ship completed since the SS France in 1961.[40] Queen Mary 2 carries eight spare blades on the foredeck, immediately forward of the bridge screen.

Three of the eight spare propeller blades mounted on the foredeckAs in most modern passenger ships, Queen Mary 2's propulsion machinery is electrically decoupled from her propellers and her propulsion arrangement can therefore be more accurately described as "CODLAG electric" (by analogy with turbo-electric and diesel-electric). The diesel engines and gas turbines drive electrical generators, which provide the power to drive four 21,500 kW (28,800 hp) Alstom electrical motors located inside the podded propulsors (and thus entirely outside the vessel's hull).[11] Unusually, Queen Mary 2's gas turbines are not housed along with her diesels in the engine room deep in her hull, but instead reside in a soundproofed enclosure directly underneath the funnel. This arrangement allowed the vessel's designers to supply the oxygen hungry turbines with air intakes without having to run air ducts the entire height of the ship, which would have wasted valuable interior space.[11]