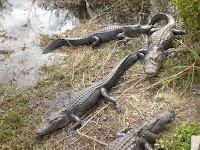 ut and the temperature rose to the low 20's C as forecast. So rented a car from Enterprise and drove for a couple of hours south to the Everglades National Park entrance on the 9336, the only significant road which penetrates the park. Entered the park at the Ernest F Coe Visitor Center for a fee of 10 US Dollars - valid for a week. 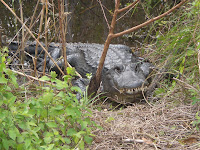 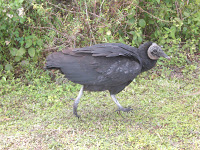 This short partly boardwalk trail is on the Taylor Slough, a deepish fresh water slow moving river. The wildlife was prolific with large numbers of Aligators lying motionless enjoying the sun on fallen tree trunks and even alonside the path or gliding through the water.

As one strolled alo 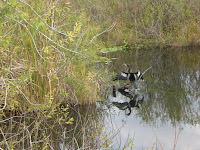 ng the trail trying to avoid the many Black Vultures that hardly bothered to move out of the way, the most abundant bird was the Anhinga, a cormorant type bird which was nesting close to the boardwalk. 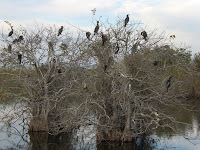 Other birds were the Wood Stork, Herons (Great White, Great Blue, Green), Great Egret, Double Crested Cormorants, White Ibis. All seemed to be peacefully coexisting despite the close proximity of the Aligators. 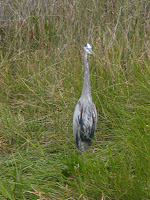 After dragging ourselves away we drove to the souther extremity of the park to Flamingo on the coast, just about the most southern part of 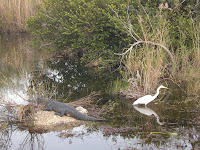 We were hoping to have lunch there but found one could only buy sandwiches as the only resturant in the Park had been destroyed a while back in a hurricane. 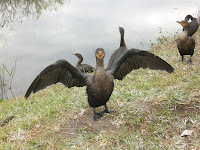 On the way back stopped at the Paurotis Pond to see a couple of nesting Roseate Spoonbills.

Had a stroll along the Mahoghany Hammock - a sort of island in the sawgrass and Cyprus marsh where, as the land is a few feet higher than the water level, 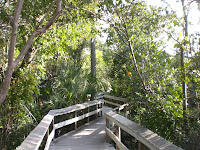 tropical trees such as Mahogany grow.

Then on to the 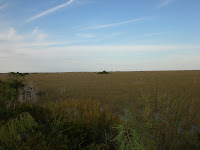 Pa-Hay-Okee Overlook which had a magnificient view over ther sawgrass marshes.

Arrived back in Miami after dark having had a very enjoyable day in the Everglades. Had a bit of a problem parking the car for the night - solved it by paying the valet service at a nearby apartment building 10 dollars to park the car in the apartment underground carpark.
Posted by dutchlink at 11:33