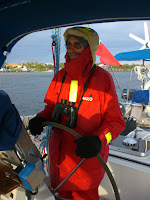 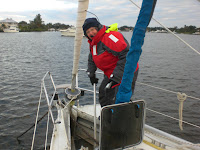 Anchor up at 0750 hrs and set off south on a cold very windy dullish morning dressed for the Arctic in fleeces , heavy weather gear, hats and gloves - and yes we are only 27 degrees north of the Equator - is this possible?

We regained the ICW via a short but very shallow section of the St Lucie river 1.4 meters - OK for us but not so good for Yara with her 2 meter keel - we wish them luck. 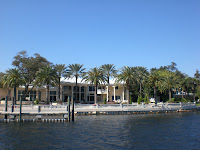 Most of the route was along waterfront properties some of which were very grand, and lots of moored expensive sports fishing boats and motor yachts. There were some wilderness areas with mangrove where a flock of White Ibis flew by and at one place we passed a large gathering of Turkey Vultures perched in the bushes. We saw only one Osprey but many Pelicans. 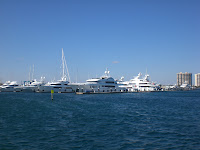 During the day the clouds disappeared and we were treated to blue skies - and as of Lake Worth, the water colour changed from murky brown to clear tourquoise - I think we must be getting close to where we want to be.

Today was the day of the bridges - only one fixed bridge but the 63.5 feet tide gauge was correct this time and we watched as our poor VHF antenna bent double - luckily it promptly regained its verticality. The rest were opening bridges - some opening on demand but most at fixed times so at times were were motor sailing flat out and others were were sailing with a partly furled Genny to kill time - all a bit tiresome.

At 16.00 hrs we turned the wheel to starboard and dropped the hook in 2.4 meters water just outside the channel just south of the Lantana Bridge.
Posted by dutchlink at 21:32