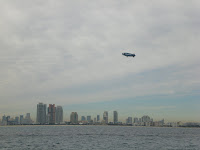 7 January 0700hrs anchor up to make the 0730 hrs opening of the 17th Street Bridge, the last opening bridge for us on the ICW. As we were waiting for the bridge to open , two other yachts who were waiting with us circled a bit too far out of the channel, ran aground and missed the opening. After the bridge we ... yes we actually raised the Mainsail - first time for many weeks - and headed out of the inlet to the open sea. The northerly wind was unfortunately too light to sail on a very broad reach so we motor sailed most of the 25 miles down the coast. As we approached Miami, we were reminded of the Manhattan skyline. Entered the Miami inlet on the flood thinking we would be anchor 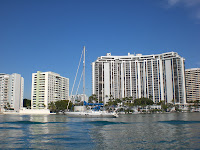 ed in time for an early lunch. However , the harbour police thought otherwise and came roaring towards us just before we reached two moored cruise ships towards the end of the Main Cut. Apparently, they had closed the Cut to non-commercial traffic as a security measure because of the cruise ships, so we had to turn around , motor against the flood for 30 minutes and enter the harbour by the southern Dodge Island Channel. The security measure seems totally bizarre as this route brought us within meters of the stern of one of the cruise ships at which point we were hidden from view from the police boat - so had we had evil intentions, we could easily have carried them out.
By 1330 we were anchored in 3 meters water just south of the Venetian Causeway between the islands of Rivo Alto and Belle Isle just below tall luxury apartment blocks. Dinghi 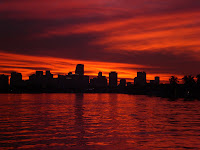 ed down the Collins Canal under a couple of low bridges to the Publix supermarket - very convenient. Water here is clear enough to see the bottom and is 24 degrees C. Air temperature is higher now that the wind has dropped and we have spent the evening in the boat without fleeces on. We were treated to a superb sunset.
Posted by dutchlink at 00:47