Jeannette has been troubled by a splinter in her finger for two weeks. Finally decided to go to doctor, who after giving antibiotics for a couple of days made an incision and withdrew a 1 cm wood splinter - relief all round that it has been found and extracted. 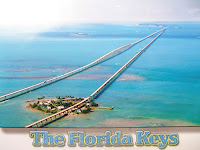 Yesterday took a coach tour to Key West leaving at 0700hrs. Found it a fascinating experience driving along 126 miles along the US 1 highway over 34 Florida Key island chain linked by 42 bridges , some many miles long (the longest is 7 miles long). Most of the way there is evidence of the original railway bridge system built by Henry Flagler in the 1800's. Many films have been shot on the Keys including Humphrey Bogart's 1948 film "Key Largo" and "The African Queen". 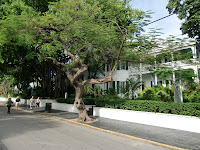 y fine old houses with mature trees but has been almost completely taken over by the tourists - still, well worth a visit. Amongst its famous residents was Ernest Hemmingway.
Posted by dutchlink at 13:22