Decided to stay longer in George Town than originally planned as the weather seems to be much better than further north and life is very pleasant here. 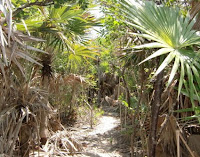 ach at 0845, returning for elevenses on the boat followed by dinghying back to Stocking Island for more walks along the beach,

scrambling over the coral rocks 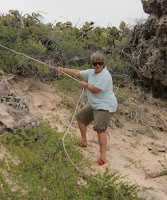 and following the numerous winding paths through the interior, taking care not to touch the Poisonwood Trees which can give a nasty rash.

One path had a fixed rope to aid the descent 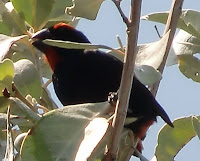 Several birds were heard but only occasionally seen - managed to take a photo of a Greater Antillian Bullfinch .
Posted by dutchlink at 00:20