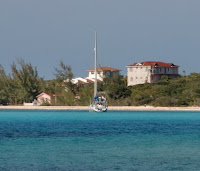 25th March the pleasant Easterly 4 Bft wind appeared as predicted by Chris Parker, our weather man and we upanchored at 0730hrs . Had a very pleasant beam to broad reach sail up the Exuma Sound for 36 miles to the Little Farmers Cay Cut. Negociated this on the flood tide and called up Ocean Cabin on VHF 16 for a mooring as the anchorages are not t

oo good here and there is a strong ebb and flood currant through the anchorage with many shallow areas and there is a possibilty of another front passing over this evening.
Terry from OC called out bearings to follow to lead us between the reefs and sand banks - however, was not too happy blindly following his instructions so tried to work it out from the charts what we could see. The flood pushed us a bit closer to t 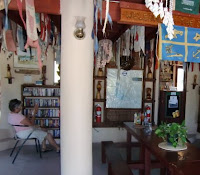 he sand bank than we should have been, but with Dutch Link's only 4 foot draught, we made it to the mooring without problem. Later dinghied over to Ocean Cabin and found out that Terry could not see us when he was giving his instructions - so very happy that we had done our own thing. 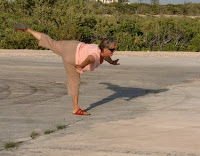 rs Cay is a very beautiful spot and all the islanders are very friendly. The island is very small and in about 90 minutes one can cover most of it. It does have an airstrip, however, which just looks as though it is part of the road system - J simulated a landing. 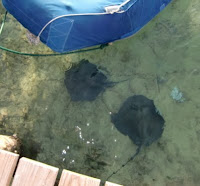 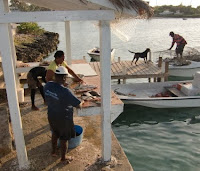