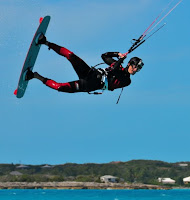 Stayed longer in Nassau than planned due to the frontal weather systems with which we have been plagued this year. Two of the days were luckily good kite surfing conditions - so Richard could show us his skills (see separate Blog for photos of some of his spectacular jumps - a crazy sport for those needing an adreneline kick).

On Friday 5 March the weather moderated so we left Nassau and motor sailed to Allens Cay - the closest island in the Exuma chain. Anchoring there is not easy as the anchorage is quite narrow, the holding very variable (have to place the anchor in a sand patch) and there are very strong currents. 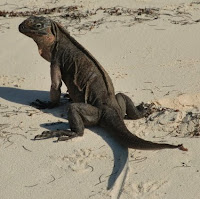 Dinghied over to beach to see the Iguanas which come out of the vegitation to greet one.

In the morning it was an interesting exercise raising the anchors as we were lying to the Fortess in a 20 kt NEerly.

Had a good fast downwind sail on the Genny on 6 March over the turquoise waters to Warderi
ck Wells at the heart of the Exuma National Park. P

icked up a mooring close to Emerald Rock.

had a kite surfing session we dinghied ashore to the Park Headquarters to pay our 20 dollar mooring fee and have a walk along the Nature Trails. Made contact with S/V SeaWalk, a Dutch family whose blog we have been following with interest. 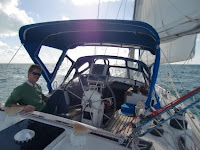 There we anchored off (24deg 11.02N 076deg 27.50W in 2.6 meters - excellent holding in sand). Rich Kite surfed but the conditions were marginal and had to be rescued by dinghy - apparently if the wind gets too light, it is impossible to stay upwind which is why kite surfers are always looking for a beach with an onshore wind. In this case the only beach was upwind so one needs a rescue boot if the wind drops.

this beach has an additional hazard - the local wild pigs that roam the island and are quite a tourist attraction as they swim out to greet any dinghies approaching the beach were very interested in the kite that Richard was preparing on the beach and had to be shooed off before they could find out if it was edible. 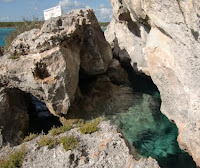 Later we dinghied over to Staniel's Cay via the Cave where the James Bond Thunderball movie was shot, and had a walk on the island.


We had planned to spend another day on one of other the Exuma Cays but the weather forecast was for the wind to turn SEerly and strengthen so we made a long but fast close reach motor sail the 60 miles to George Town in an ENE 3/4 Bft wind, entering the Exuma Sound at the Galliot Cut. Arrive 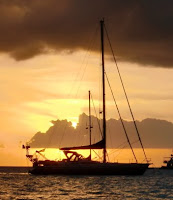 9 March there was a good Easterly 4/5 Bft blow and Richard had a great kite surf off the sand spit with the wind strong enough to perform countless trick jumps. Later in the day we motored over and anchored in Kidds cove close to George Town (23deg 30.19N 075deg 45.79W ) in 1.4 meters at LW in excellent holding sand - (very good as we expect squall of 40 kts tonight 12 March). 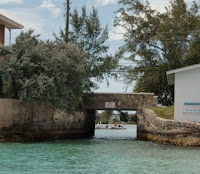 ashore - very good free floating dinghy dock in Lake Victoria in the centre of the town which is accessed under a small bridge - there is free drinking water on the pontoon. 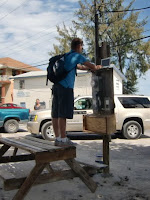 al supermarket area there is free Wifi - signal requires some ingenuity / luck to get good reception.

Hired a car for a day (77 dollars including full insurance from a company opposite the supermarket. Drove up to Barraterre at the northern end of the Great Exuma Island - not terribly interesting other thean the occassional glimpses of the beaches.

for his flight back to the UK.

Later we drove down to the southern tip of the island and had a pleasant lunch at D's Santana's Grill on the beach in Williams Town.
Posted by dutchlink at 18:35