8 April we were woken by the 0500 hrs alarm and after breakfast walked 30 minutes to the Telmo bus station where we caught the 0700 nr 303 bus to Vega San Mateo. Unlike previous times, the overcast skies over Las Palmas did not clear as we climbed into the hills. Instead of the usual blue skies, the peaks were covered in cloud and it was even raining in San Mateo. Nevertheless we continued with the plan and caught the 0800hrs nr 18 bus from San Mateo which took us up to Cruz de Tejeda. The weather deteriorated further and we were more or less continuously in cloud with rain falling steadily. Decided to forget the idea of hiking and instead used the opportunity to explore the Nr 18 bus route as this passes the starts of many hikes which we have not yet done. After leaving Cruz de Tejeda, the bus made a detour down the GC156 road to the hamlet of Culata - an excellent place to start hikes around Roque Nublo - returning to the GC 60 to Tejeda (arrived at 0900hrs) via the GC 608. The bus then kept to the GC60 all the way to Faro, Maspalomas passing through Ayacata,San Bartolome (arrived 1000hrs) , Fataga and Arteara. Visibility was very poor due to the cloud most of the way so we missed the spectacular views. 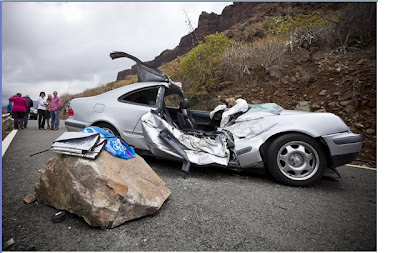 Photo from  http://www.canarias7.es/
﻿The roof of the car had to be cut off to free the trapped driver and passenger - the driver survived uninjured but the passenger was not so lucky and had to taken to hospital.
- moral is maybe not to drive in the mountains in bad weather.

In Maspalomas (arrived around 1200hrs), where it was actually also raining - almost unheard of -  the bus driver dropped us off at the bus stop for the Nr 30 bus back to Las Palmas - the nr 30 bus was actually at the bus stop and our driver very kindly hailed its driver to wait for us to cross the road. We were back on Dutch Link by 1300hrs after a 5 hour bus trip - disappointed at not being able to hike but happy to have explored this bus combination for future hikes.
Posted by dutchlink at 20:27