The Grib Files indicated that Sunday 22 July would be an excellent day to leave Flores for the middle Azores group of islands. We would have prefered to stay a few days more on Flores but strong winds from the NE and rain were forecast for later in the week and we did not want to be stuck on the boat in a NE swell. 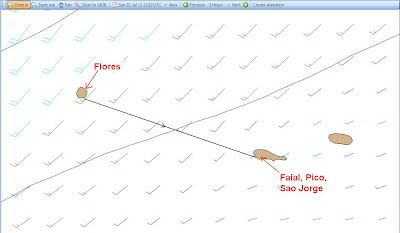 As we were not sure we whether we would make landfall on Faial or Pico, we left the harbour at 0830hrs which would give us time to arrive in daylight at either island 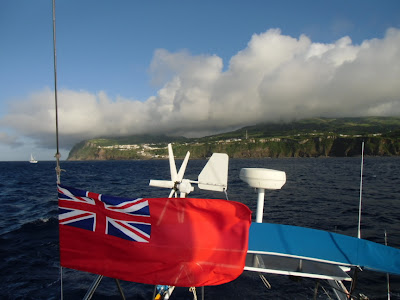 Leaving a cloud covered Flores behind 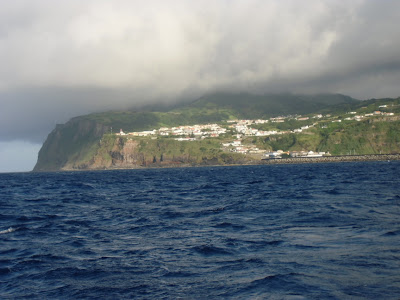 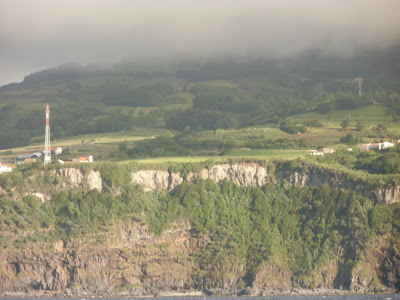 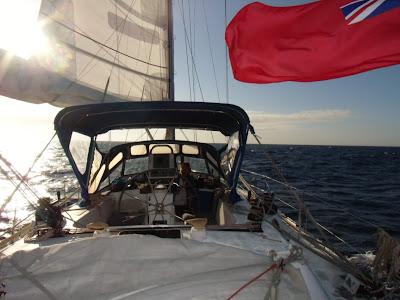 Thanks to a tip from our friends Dawn & Chris on M/V Arabella, Jeannette was able to navigate from her bed via the Navionics electronic charts (50 GBP for the whole of Europe excluding UK and Denmark) on her IPad - the inbuilt IPad GPS being able to still pick up our position signal through the Aluminium deck - amazing. 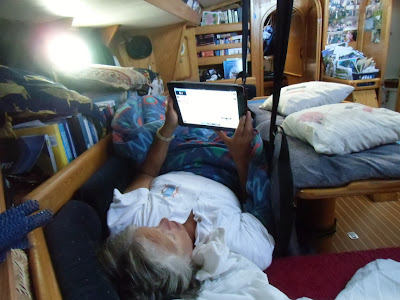 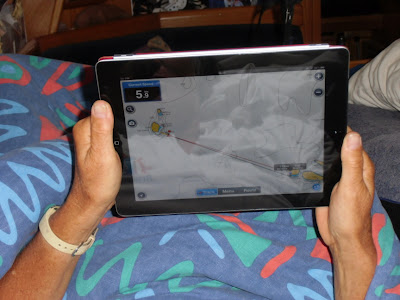 The red arrow shows Dutch Link's position and the black line is the course to Faial - distance to go, bearing and SOG automatically displayed 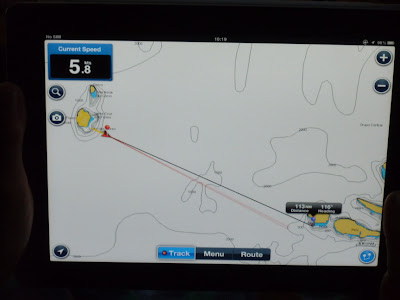 A wonderful day - calmish seas, blue skies and enough wind in the right direction allowing us to sail on a beam reach - the fastest point of sailing 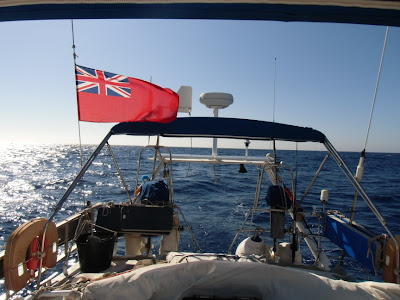 Decided early on not to go to Pico as the weather was unlikely to be good enough for the hike to the top of the 2351 meter spectacular peak in the coming week. This meant that we had to reduce speed so as not to arrive in Horta on Faial in the night. So furled in most of the Genny to keep speed down to around 5 knots. 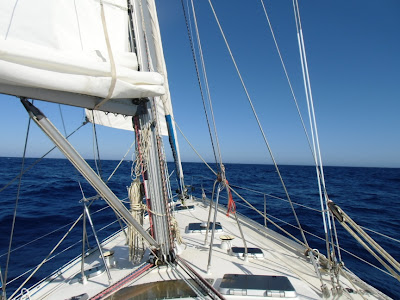 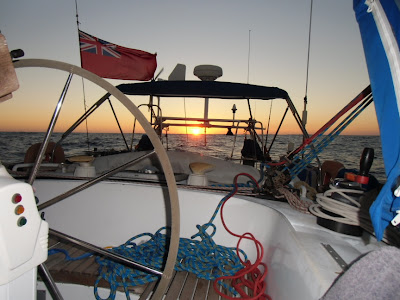 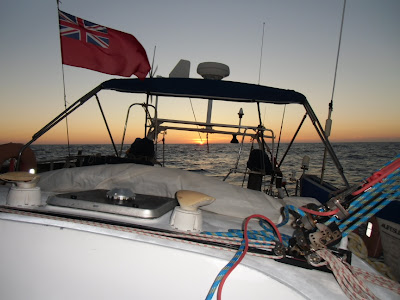 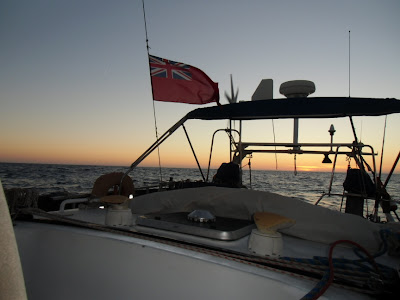 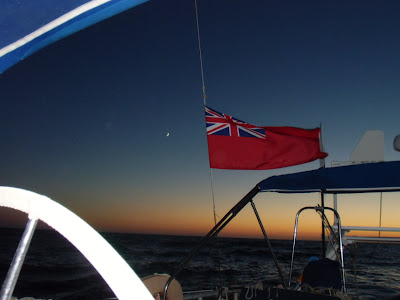 Tried to capture the moon low in the sky 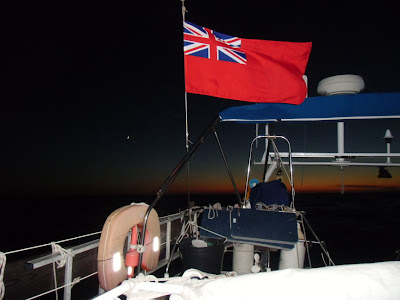 After a very pleasant starry night, dawn starts to break as we approach Faial 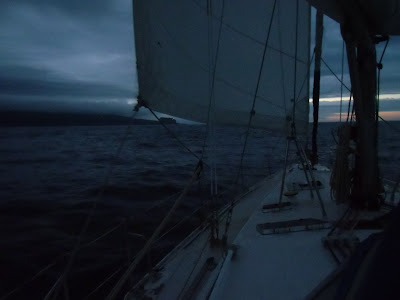 The defunct Lighthouse silhouhetted with the new peninsular, Punta dos Capelinhos, which appeared in 1956. This volcanic eruption severely reduced the angle of visibilty to the lighthouse - since then, although some charts show it as a working light, it is no longer in use.
(see Blog June 2010 for our visit to the lighthouse  - Link :-
http://dutchlink.blogspot.pt/2010/06/faial-azores-9-to-13-june-2010.html ) 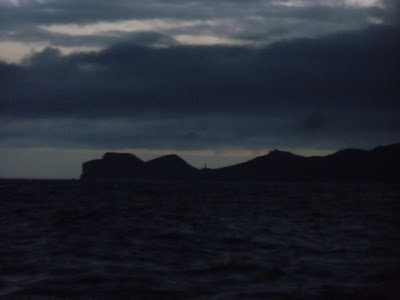 Approaching the headland on Punta do Castello Branco with its three distinct fixed red lights - not shown on the chart. 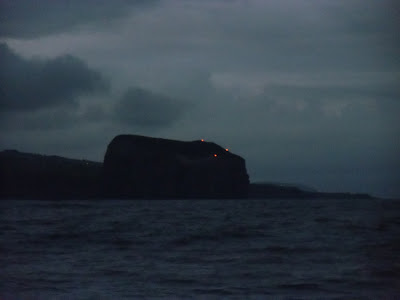 Looking back at Punta do Castello Branco once day has broken 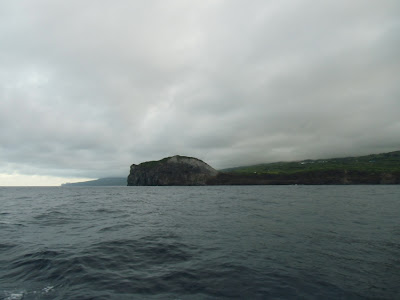 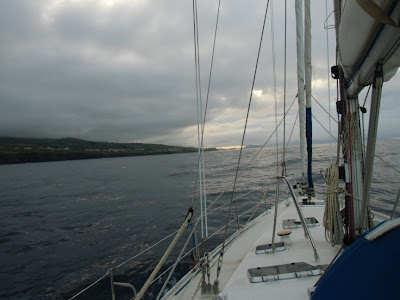 The south coast of Faial close to Horta 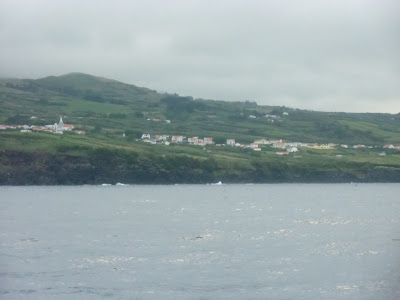 Monte de Guia to the right 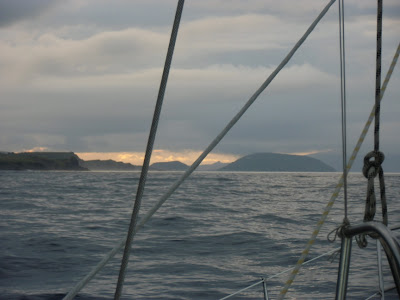 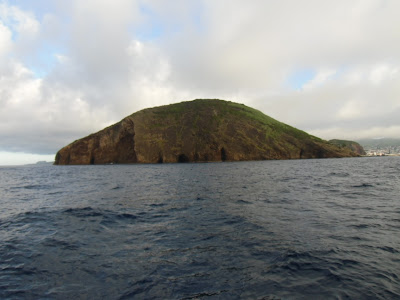 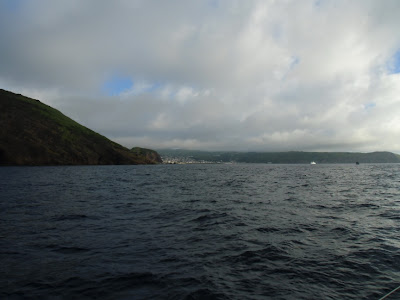 the outer breakwater of Horta 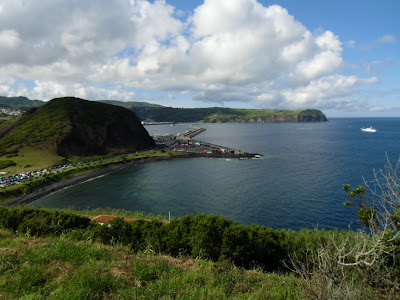 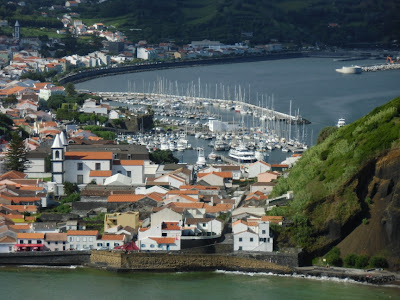 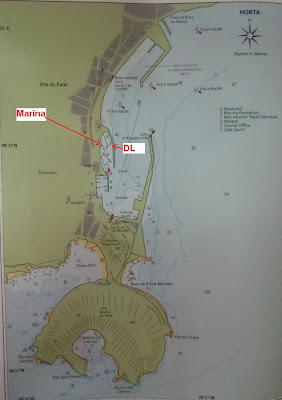 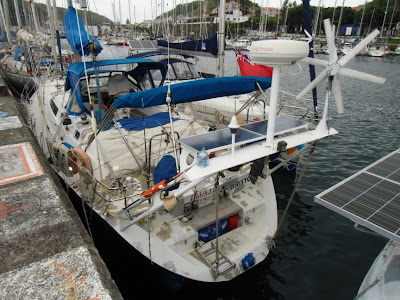