Grib files indicated that 4 July would be a good day to leave Santa Maria (the most SEerly Azores Island) for the 320 nmile sail to Flores (the most NWerly island).
The huge Azores high looked as though it was going to stay for several days to the NW of Flores giving us light ENE to NE winds 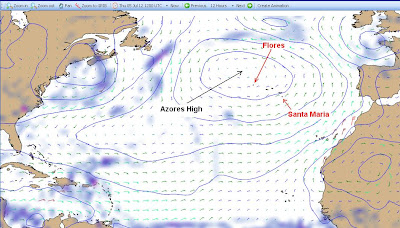 So at 11.15hrs we motored to the fuel dock in the Vila do Porto marina and at 11.35hrs we left the marina By 1215hrs we were out of the lee of Santa Maria and were sailing with full Main and Genny at 40 degrees to the apparent wind in a NNE 2 to 3 BFt wind.
Last views of Santa Maria 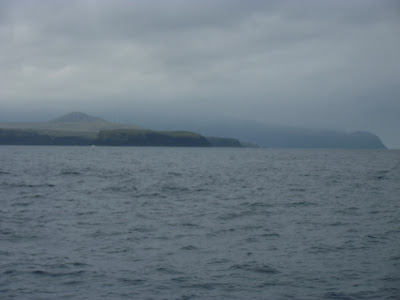 Sailing into the sunset 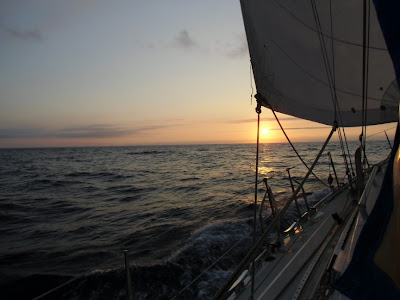 The wind became more easterly as predicted allowing us to sail free-er. However, as we expected the wind to return more northerly before we reached Flores, we decided to take advantage of the more easterly wind and sail north of Sao Jorge and Faial, giving us a better angle to the wind as we approached Flores - instead of sticking to the rhumb line which would have taken us just south of these islands. 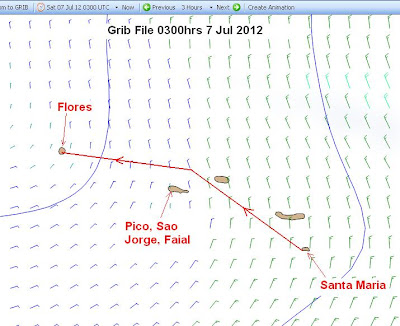 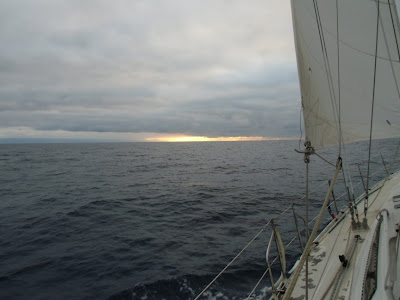 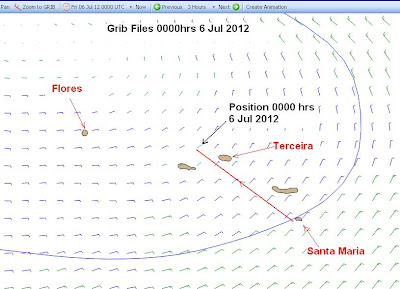 Leaving Terceira behind us 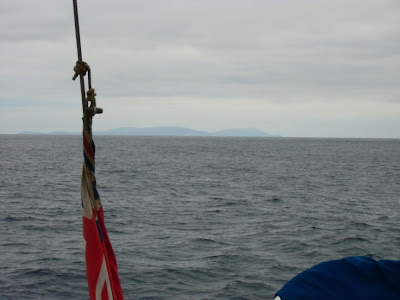 With light ENE winds, progress was slow but very pleasant with hardly any chop. Jeannette decided to do some sewing - modifying Mikes trousers. 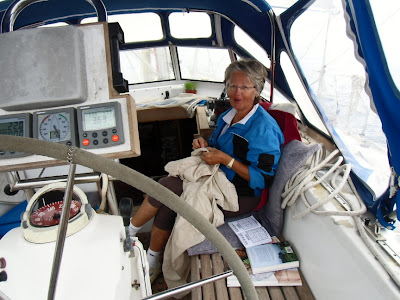 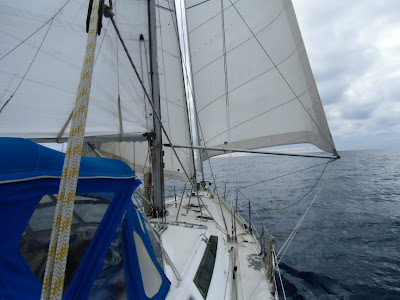 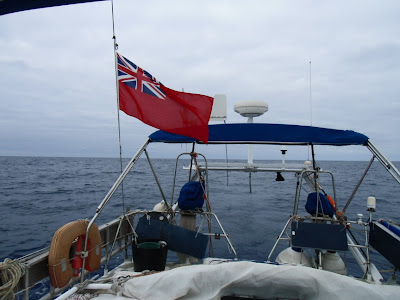 Sun about to rise on 7th July

Corvo, the tiny island north of Flores comes into view 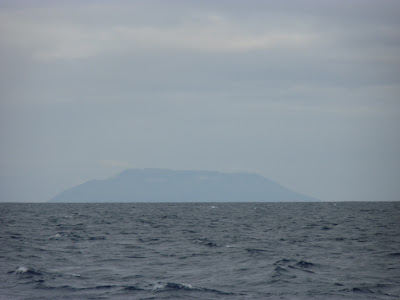 and Flores , our objective. 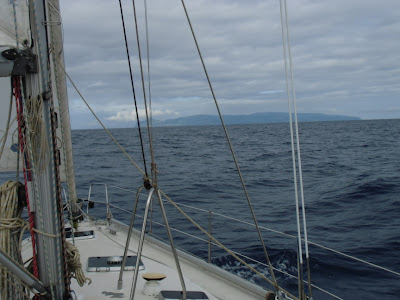 This time the wind was not quite as originally predicted - it stayed ENE longer than initially forecast so our dogleg to the north of Sao Jorge was not strictly necessary - still it resulted in a very pleasant sail. 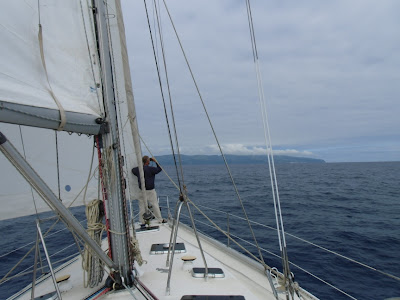 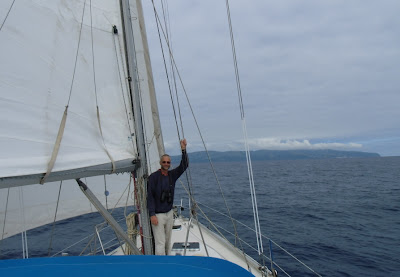 During the trip, we were intrigued to find that the GPS receiver on the IPad was powerful enough to be able to track our progress even though the IPad was in the saloon (with an aluminium deck above it - amazing 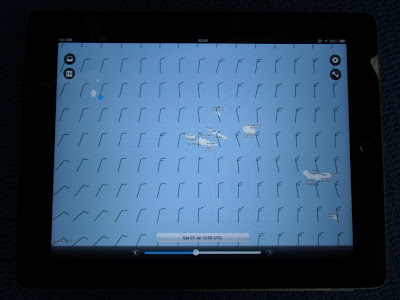 As we approached Flores, a pod of 5 dolphins decided to play for about half an hour just in front of our bow - always an uplifting sight - we never tire of it 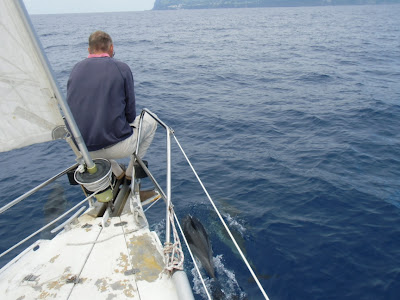 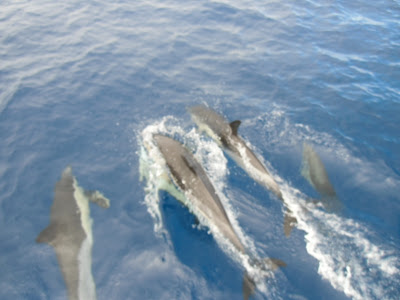 We took some video of their antics 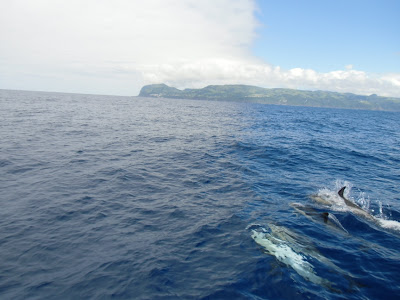 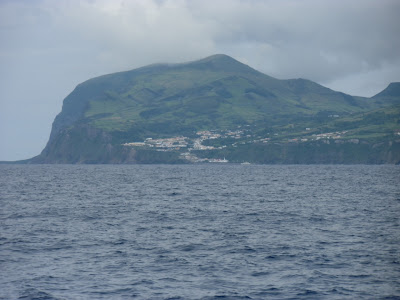 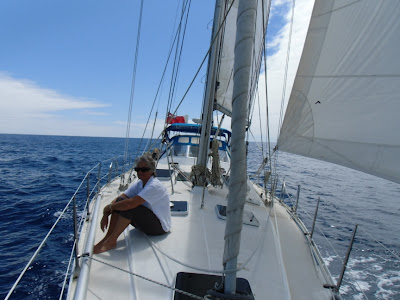 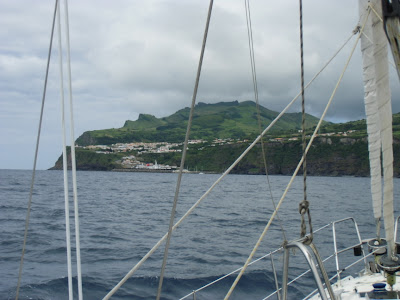 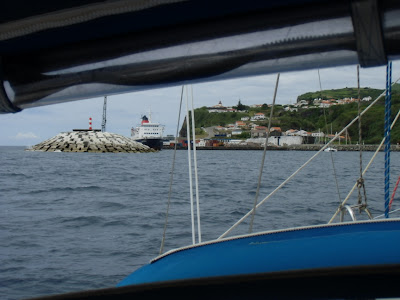 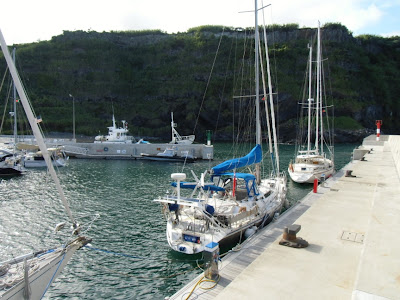 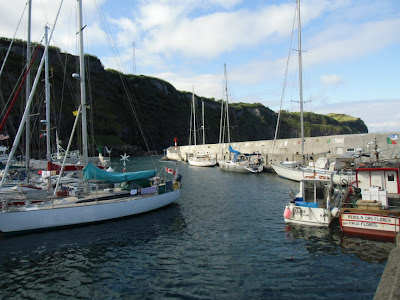 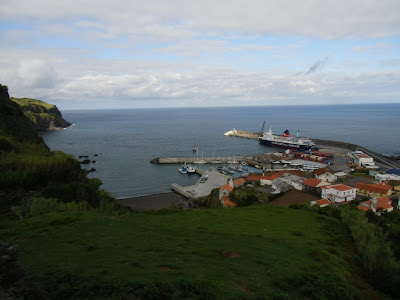 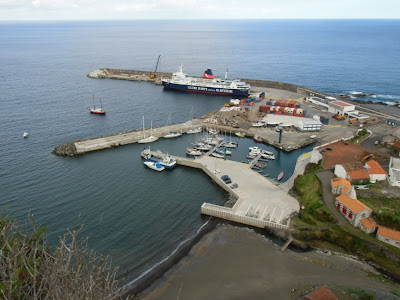 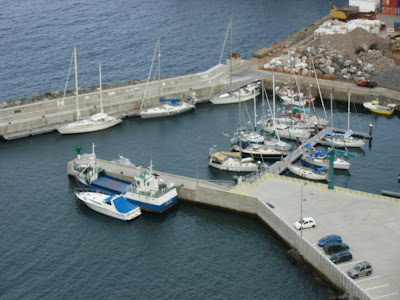 This was our third attempt to visit Flores - the first time was when we crossed over the Atlantic from Bermuda in 2010 - at that time there was a huge nasty frontal system which went through Flores forcing us south - we made landfall in Sao Miguel. We attempted to sail back back gave up when we reached Faial as the wind disappeared . Last year we had plans to make another attempt but enjoyed Terceira so much that we never got any further west.
Thus, having finally made it here, and bearing in mind Flores has a higher chance of bad weather than any of the Azores islands, we plan to stay for 2 to three weeks here, weather permitting.
Posted by dutchlink at 17:17