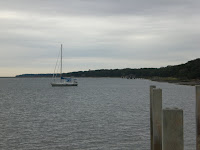 the free Seacamp Dock and checked in with the Park Ranger. Joined a couple from Ohio on a short tour led by a Park Ranger to the ruins of the Dungeness Mansion and learned about the history of the island from the times of the Timucan Indians (2000 BC ) to the purch 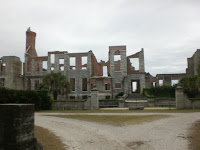 ase by Thomas and Lucy Carnegie in the 1880s to the present status as mainly a National Park. Caught a glimpse of the wild horses that roam freely over the island. 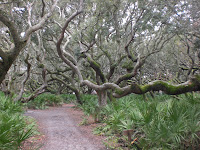 Walked under the knarled and twisted branches of ancient Live Oak woods festuned with Spanish Moss with the low Saw Palmetto palms growing underneath. 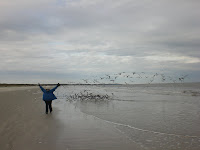 a board walk above the reed marsh, through the Dutch-like dunes and strolled along the beach watching the Sanderlings rapidly strutting along the advancing retreating waterline and the groups of gulls and Oyster Catchers.
Posted by dutchlink at 15:15

Really enjoying the blog, but we don't envy your weather!