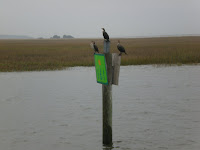 The last four days we have been in very remote and mainly uninhabited but beautiful areas without access to WiFi.
Left Turners Creek in the dark on 8/12 so as to be in time for the 0800 opening of the Skidaway Bascule Bridge. The route took us along rivers meandering between reedy islands crossing the sea inlets of St Catherines and Sapelo Sounds passing many dolphins and pelicans on the way as well as several herons , oystercatchers , cormorants and other water birds. 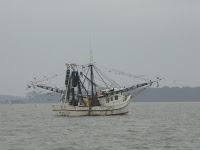 now, we have been in shrimp country and in the sounds saw several shrimp boats. The wind was gusting up to 20 knots from the North so most of the way we managed to gain a knot or two with the aid of the Genny keeping us well ahead of Rhum Line who usually motor faster than us. By 1600 hours we had had enough for the day and anchored for the night in the wide Back River (mile 651) together with Rhum Line.
Off again by 0640 hrs 9/12 we negociated the very shallow Little Mud River encountering depths of around 2 meters in the middle of the channel- once again we were thankful for Dutch link's 1.2 meter draft. 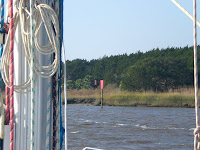 The channel was so narrow that one had to make use of the range marks to avoid going aground. The morning turned out to be unexpectedly sunny and warm (out of the wind) - the weather channel on the radio was telling us that we were encountering unseasonally warm air with chance of strong thunderstorms with damaging winds. 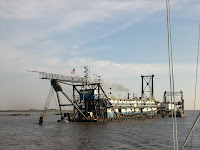 lose to a dredger - later heard on the VHF that a yacht we had overtaken ran aground just past here and had to wait for the tide to float off. The southerly wind steadily increased during the morning to the mid 20 kts gusting 30 kts - mainly on the nose so no sailing. Crossed a couple of sea inlets - St Simons Sound and Jekyll Sound - the later requiring us to go a few miles offshore to round the shoaling banks. With 30kt gusts and a strong current running kicking up quite a sea, the Jekyll Sound was a reminder of what it can be like at sea.
Reentering Jekell Sound from the see, the sand dune like 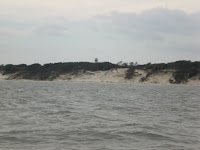 cliffs reminded us very much of Vlieland in the Dutch Wad where we have spent many happy times. At 15.30hrs we called it a day and anchored in the beautiful protec 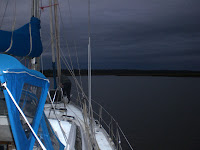 Yara kindly called us up on 16 to warn us of strong thunderstorms heading our way and so we let out another 10 meters of chain and watched the sky darken. The air temperature was warm enough for us to sit in the cockpit for our early evening meal as the rain pelted down Amazonian style.
Left the anchorage at 0700 hrs 10/12 in a NW 3 to 4 under grey skies and benefited from the last of the ebb making up to 8 kts SOG passing the Navy's Kings Bay nuclear submarine base . By 0900 hrs we were anchored off Cumberland Island.
Posted by dutchlink at 15:00