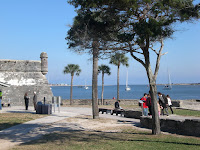 Dinghied to the St Augustine Municipal Marina dinghy dock at 11.30hrs on a cold but almost cloudless morning 20th December. 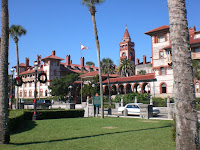 Wandered around the old Spanish town with its many beautiful well preserved old buildings all in Spanish style - we felt that we could have been in Spain. Indeed St Augustine was founded by the Spaniard Don Pedro Menendez de Aviles in 1565 and is the oldest permanent settlement in the USA.
Many of the later buildings were built by the railroad tycoon Henry Flagler in the 1880's. 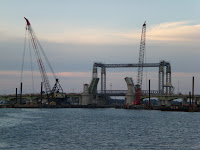 Went through the Lyon's Lift Bridge late afternoon to fill up with diesel (2.79 USdol/USGal equiv to about 45 pence per litre ! ) and water at the Municipal Marina and anchored on the southern side of the bridge ready to catch the flood tide early in the morning. 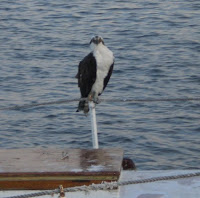 Passed an Osprey perched on the guard rails of a nearby boat.
Posted by dutchlink at 23:09