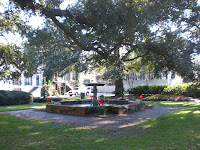 Left Beaufort early 6/12 and motored without incident through the meandering rivers and cuts through the reedy marshes to Turners Creek mile 585 of the ICW. Anchored in the soft mud and had tea on board Rhum Line. 7/12 took bus 24 to Sa 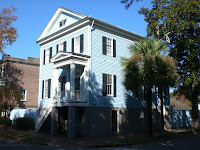 vanah and spent the day with Tris admiring the fine houses and wooded squares of this fine Georgian city.


Lunched at Spankies on the water front and shared an "8 Piece Basket" - chicken fingers in and potato slices in batter served in a basket.

Passed by the Telfa 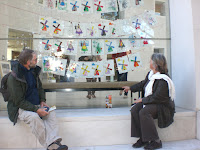 ir museum which had an exhibition examining role Dutch culture has played in shaping American artistic tradtion entitled "Dutch Utopia" - in the period 1880 to 1914 many American artists went to the Netherlands to study the work of the old masters. Children have been invited to paint Dutch subjects.

Savanah was the site of a famous battle in the War of Independence in 1779 in which the Brits defeated the American rebels. 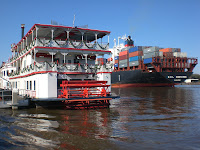 Today Savanah is one of the USA's major ports with a large amount of container traffic.
Posted by dutchlink at 23:46