Kitted out yet again in thermal underwear, fleeces and heavy weather gear we raised anchor at dawn at 0645 hrs 21 December on a fine but cold day and motored south to Daytona Beach where we are now anchored in 1.9 meters at low water (ICW mile 833). 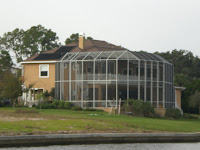 On the way we passed many houses with huge insect screens around the terraces and balconies. 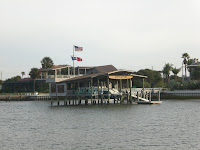 many houses have very long jetties with boat lifts - some more elaqborate than others.

All went according to plan until we reached the first of the many bridges in Daytona Beach - the tide guage showed less than 63 feet and the tidal range was less than 6 inches. In a VHF chat with another high masted boat who was waiting for the tide to drop, found out that due to a yacht suing the State for damage as the central light on the bridge was lower than the stated bridge height , Florida has made the official height of all its bridges 63 rather than 65 feet and adjusted the tide guages accordingly. After anchoring for a while until we had just over 63 feet clearance, we gingerly approached the bridge and amazingly went under without hearing a single ping. The same happened for the next two fixed bridges - so do we in future add two feet to the tide guage readings of all fixed bridges if Florida ?? We will only know after we have passed under the last bridge!
Posted by dutchlink at 01:10