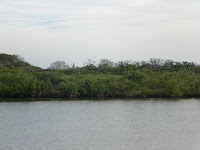 Once more dressed for the Arctic , anchor up as just getting light at 0645hrs, continued south past the shoaling Ponce de Leon Inlet. The route took us through Lagoons partly filled with mangrove covered islands. Saw lots of pelicans including the white variety, sometimes flying/ gliding in squadrons with wing tips an inch above the water. Seems to be osprey country - spotted 5 of which one was flying with a fish grasped in its talons - it landed on a nearby marker pole and started eating it as we motored past. 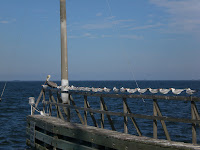 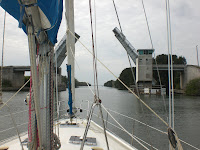 ed out and we entered the Mosquito Lagoon then through the bascule bridge in the Haulover Canal to the wide shallow Indiana River.

Here we saw in th 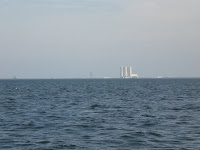 e distance some of the NASA launch pads and Shuttle Vehicle Assembly Building of Cape Canaveral.

Passed, with some trepidation under several fixed bridges showing around 63 feet - most we cleared without touching, but one pinged our antenna so still not sure whether Florida is consistent with the reported changing of the tide guage boards. Anchored off the ICW channel a mile or so before the Eau Gallie Bridge just after sunset at 17.45hrs at ICW mile 913.
With the help of a mainly positive current and some genoa, we covered a record 79 miles.
Posted by dutchlink at 09:51