1830 hrs 20 June we were at the Praca de Torros ready for the bullfight - our first for many years. We treated ourselves to seats in the best sector - the Sombra (shade) rather than Sol (sun) or Sol/Sombra. Terceira is one of the few Azores Islands where the spectacle is still enthousiastically pursued. 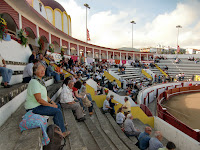 The evening's programme included 3 bulls to be fought on horseback by a mainland Portuguese Toreador, Luis Rouxinol - with the bull finally subdued by the usual Portuguese line up of young daredevils.

Once subdued , the bulls were encouraged to leave the ring with capes and flags (unlike in Portugal where a herd of cows is brought in the ring to calm the bull down

and lead out o

The other 3 bulls were fought by a Spanish Matador, Miguel Angel Perera , Spanish style but without the gruesome Picador and without killing the bull by sword in the ring. 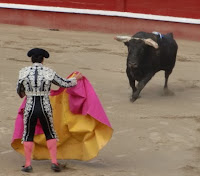 Before the bull enters the ring, its weight (in kilos) and number are displayed on a board. After entering the ring , the bull is played with with pink/ yellow capes. All bulls came from the Rego Botelho ranch. 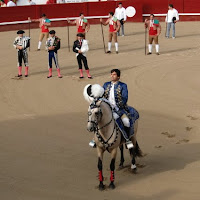 The Toreador displayed superb horsemanship, keeping the bull very close sometimes even galloping sidestep just ahead of the bull.

However, he disappointed the crowd with several misplaced banderilleros (barbed darts) and after one fight was not given the usual round of honour.


The head guy then dons his funny red/green hat and, with halting steps, approaches the bull making Ugh Ugh sounds with hands on hips. At a certain moment, the bull gets irritated b

y this and charges. The head man then leaps between the horns of the bull and is carried by the bull to his waiting colleagues who try to slow the bull down. Once the bull has been stopped, one of the guys grabs the tail. The bull tries to gore the guy who is just out of reach. After several circles the bull sometimes falls on the ground and the fight is over. 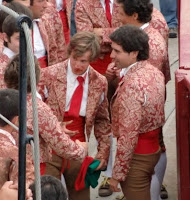 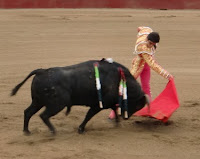 The Spanish Matador was very good and played the bull with the cape in fine style keeping the bull close to his body most of the time and keeping the bull fluidly in motion. The crowd were very appreciative of his skillful performance.

It is traditional for flowers and clothing to be thrown by the crowds at the performers in appreciation and sometimes, the matador is given a lap of honour.

Portugal is the Biggest Racist country that i have ever lived in. I feared for my life there and i consider myself lucky that my family got out alive! I have never lived in such poverty (Sopas dos Pobres everyday) 40% unemployment rate and 60% of the population earn less than $932 USD per month, and that's considered Middle Class here! Within the European Union it is the worst of the worst place to live.

The bottom line is the bulk of the People in our poor country exist in a brainless comma that is fed by Ignorance, anti-Spanish hate, and severe Racism of pretty much everybody that isn't Portuguese! And, Portugal started the Global Slave Trade in 1441 so it is definitely NOT a safe place for Blacks!!

I found important websites that explain the Severe multi-generational Racism and Hate that exist in Portugal today, and i highly encourage all to read them and spread the word in order to avoid innocent, and desperate people from living or visiting there. Get educated on the Truths about Racist Portugal now.