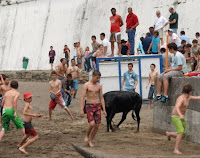 No Feira on Terceira is complete without something to do with bulls.

Everyday there is a "Tourada a Corda" or bullfight with bulls which have a long rope tied around their necks.

This is usually in a street which has been cordoned off. On Sunday afternoon there was a 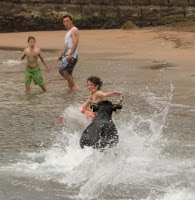 the beach with young bulls. A rocket is fired signalling that a bull is about to be released from its pen.

Then the bull charges across the beach, sometimes straight into the sea to the surprise of those swimming there.

ht" it using umbrellas as capes.

All the time two or three men keep a hold on the other end of the rope to reduce the risk to the public. 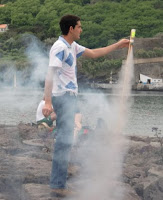 is then manhandled back into its pen and another rocket is fired signalling the all clear.

This type of Bull fighting seems to be unique to the Azores and Terceira is the island where it is most popular.
Posted by dutchlink at 15:07