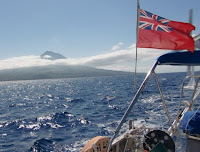 Files indicated that our plan to sail 48hours to the western most island of Flores would probably involve 24 hours of motoring there and 24 hours back so we changed our plans and decided to go to Horta instead.

Wednesday 9 June we left Ponta Delgada at 0800 hrs and headed west. Soon the wind picked up to a NNE5/6 Bft and we had a very rough few hours with waves frequently breaking over the bow and water all over the deck as we battled our way in

confused seas hard on the wind. However, the wind moderated in the evening and the seas calmed and we had a good sail till we were just south of the volcano on the island of Pico when we lost the wind and had to motor the last couple of hours to Horta on the island of Faial.

An hour away from Horta, much to our surprise we heard our friends on S/V Windmiller calling Horta Marina on VHF16. So we called them up and arranged to share a car with them to tour the island the next day.

couple of other boats at the fuel dock, checked in and thankfully were allocated a berth in the marina rafted up against 2 other boats.

Horta is the first landfall most yachts make when crossing the Atlantic from West to East.

The marina was packed with boats but we still managed to get shore power and the cost was again only 20 Euro/night. We met up with our friends David and Sarit from

Windmiller, who we had met on the Black Sea Rally in 2004 and again in Baltimore and Annapolis last year, and had a great time together touring Faial and later Pico by hire car.

There is a old tradition that visiting yachts paint a picture with name of boat and crew on the dockside - very special - however, I'm afraid we did not

give give ourselves enough time to do this - maybe next time. 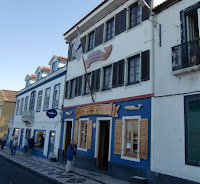 The other tradition is to have a drink in Cafe Sport on the harbourside which we did find time for! Unfortunately, Peter, the original owner has died but the tradition lives on.

On our trip around the island we visited the area at the south west of the island which was, to everyones horrified surprise, added on in 1957 when a volcanic eruption took place and a new extension to the island was created causing a lighthouse to become almost landlocked. The lighthouse keeper is reported t 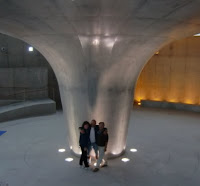 o have "stayed with his ship" ie lighthouse in true maritime tradition, throughout the eruption.

There is an interesting underground museum at the site

which has a 3D film about the event.


We visited the central caldera w

hich was almost in the clouds.

than Sao Miguel with black Basalt/partly whitewashed buildings and churches, much farming activity and hydrangeas and other wild flowers in abundance. 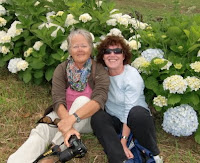 The coast is mainly rugged with black basalt a

nd lava formations and a few bays with black sand.

In the marina we had a very sociable time several other yachties and especially with the two boats we were rafted two, Alex and Daria on S/V Aleria and Alberto, Martin, Bea and Patrick from Argentine. One evening Alex and Daria asked the help of several "neighbours" to help them choose which of th

e excellent inexpensive wines to take back to Ireland - so we had a structured very enjoyable wine tasting evening on board Aleria. Alex and Daria (Blackwell) have written several books on sailing - the most recent being "Happy Hooking" an excellent treatise on anchoring and types of anchor. 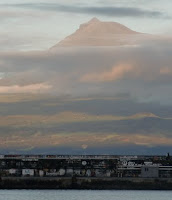 Over the harbour wall in Horta the towering peak (2351 meters) of the neighbouring Island of Pico is majestically visible when the mood takes it - however, it often has fits of shyness and hides behind a shroud of cloud.
Posted by dutchlink at 14:03