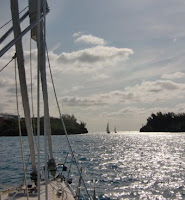 At 0900 hrs 13 May 2010 left St Georges Bermuda and headed east. With the expert help of weather routing emails from weather guru Chris Parker, we weaved our way for 2268 nmiles across the Atlantic Ocean avoiding storms and calms arriving in Ponta Delgada, Sao Miguel, Azores at 1745 Bermuda time (2045 hrs local time) 30 May after 17 days 8 hours at sea.

hown was typical for the whole passage with lows developing over the USA and rapidly moving east trailing their nasty cold fronts close to our route.

We started off running with the Twistle rig but by 0900 hrs the next morning, it became obvious that this was not the rig for this passage, so we derigged it and resorted to Mainsail and Yankee. Indeed during the passage, we had days of close hauled, beam reaching and broad rea 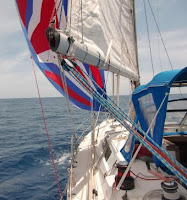 ching. At times the wind became so light that we put up the cruising shoot and for a 12 hour period, we just drifted with no sails in a flat glassy calm, ending up 2 miles closer to Bermuda.


The whole trip there were gales a few 100 miles north of us with huge nasty trialing fronts, and calms to the south of us. Chris Parker managed to route us nicely between the two experiencing winds most of the time in the 4 to 6 beaufort range - we sailed an extra 300 plus miles but only had winds in excess of 30 knots for a short period. 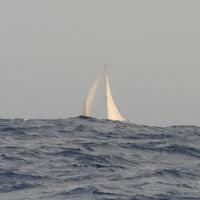 with friends mid ocean. The picture gives an impression of typical ocean swells with Norwegian Blue 's hull hidden behind the waves.

Mainsail plus full Yankee whilst broad reaching even in wind strengths as low as force 5. This arrangement had the advantage that the centre of effort was well forward making it easier for the auto pilot, and the mainsail did not blanket the yankee on a very broad reach. It also had the advantage that it only required us to furl the yankee should we encounter a 50 knot squall.

On the way we saw

a whale as long as our boat spouting 100 meters to port and several pods of dolphins came to play swimming just centimeters from our bow - always a pleasure to watch.

potential collision situations and by giving us name of ship , Course over Ground (COG) and Speed over Ground (SOG), enabled us to call the ship on VHF 16 resulting several times in the ship changing course to pass safely a mile or two away. We also met a few other sailing yachts, the most interesting being S/V Whitbread Heritage - our son Chris informed us this was the former Great Britain II which was had the fastest time in the first Whitbread round the world race and has subsequently made at least 5 circumnavigations.

Originally we had intended to make landfall in Flores, the westernmost of the Azores islands. However, the cold front positioned itself over Flores and Horta so that we had a choice of either fighting 50 knot squalls or staying south and heading for Sao Miquel, the second most east island of the archepeligo. Being whimps we chose the later option and

experienced excellent broad reach sailing in a S/SW 4 to 6 Bft wind for the last few days whilst Flores and Horta were still suffering from the front. The picture shows our landfall at Ponta Delgada. 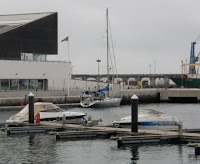 We are now safely moored in the new Ponta Delgada Marina which is very reasonably priced - 20 euro/night including water / electricity and excellent showers. The check in went very smoothly with all, very friendly, officials (immigration, police, customs) all in offices in the same building as the marina office.
Posted by dutchlink at 23:12