At 0800 hrs 14 June we left Horta and motored the 20 or so miles in calm seas and little wind to Velas on the neighbouring island of Sao Jorge. We tied up alongside E pontoon in the new marina below high cliffs. At 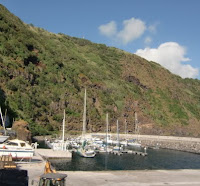 dawn and dusk each day we were "subjected" to the raucous cries of the colony of Corys Shearwaters that overnight in crevices in the cliffs. 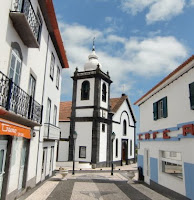 The helpful tourist office in the picturesque small town of Velas gave us information on buses and hiking routes. 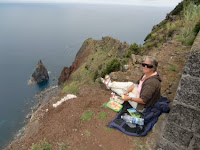 The first hike took us to the western end of the island where we picniced on top of the steep cliffs by the lighthouse. 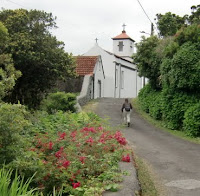 The next day we took the bus to Ermida on the north coast and followed the trail through the village and then between the fields to the edge of the 300 meter high cliff. 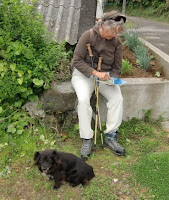 On the way a very friendly small black dog took adopted us for the day and for the next 4 hours was our four legged companion. 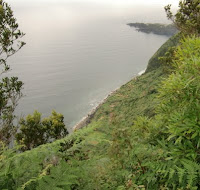 The narrow path zigzagged steeply down the verdant cliff

past many different types of flowers with a continuous spectacular view over the ocean. 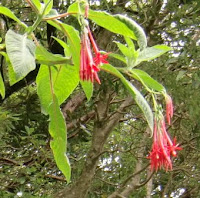 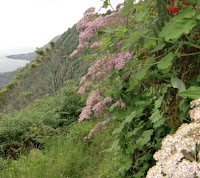 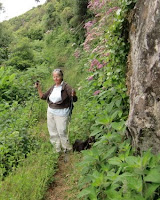 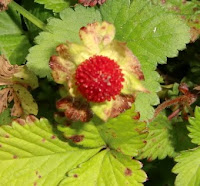 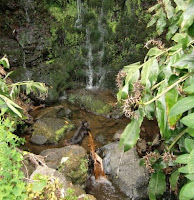 e was an almost constant sound of trickling/ falling water and occassionally we came across small waterfalls along the path.

After 1 1/2 hours we reached the Faja de Alen - a narrow strip of cultivated land interspersed with small stone houses just above sea level. The Faja was full of stone wall separated small fields where vegitables and vines were being grown. There are several of these Fajas along they coast - many of them only accessible by steep paths , suitable only for walking and maybe donkeys. 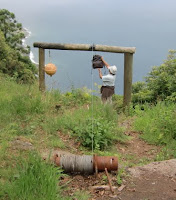 In order to facilitate the carrying of materials to the Faja, a few wires have been installed from the cliff top to the Faja - the materials would be suspended from the wire and allowed to fall to the bottom where their arrival was cushioned by a pile of old tyres.
Posted by dutchlink at 14:51