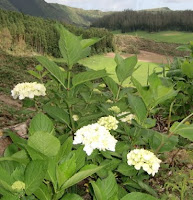 During the last few days we have explored the beautiful island of Sao Miguel partly by bus but mainly by car by our friends Manuel and Leticia who gave us a great tour of the island.


The scenary is spectacular. Everywhere the roads , tracks, fields are lined with bushes of wild hydrangeas , Azalias and other flowers.

The island is dominated by three major calderas, each of which contains one or more lakes:-

Sette Cidade in the north west, 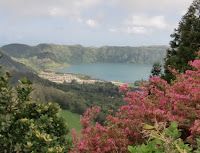 Fogo in the middle and

Furnas towards the east.

The first time we visited Sette Cidade we took the local bus to the little town inside the caldera, bought bread from the local bakery for our picnic, 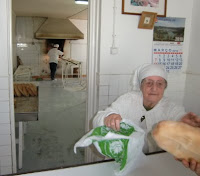 passed by houses many of which had

small tiled pictures of a saint above the door

and then had a hike to the rim of the crater

and the ocean on the other - spectacular

The coastline is rug 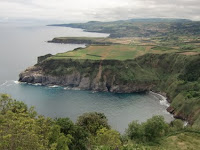 
Every available space is given over to agriculture with fairly small fields separated often by dry stone walls - in many ways it reminds one of parts of England. The climate and soil quality is such that one seems to be able to grow everything from temperate vegetables and fruits to pineapples and bananas. Even tea is grown here.

There are not many sheep here but there are many cows and milk products are exported.

Although the volcanos which produced this island have been dormant for many centuries, there are several areas where there is geothermal activity at the surface, mainly in the Fogo region. Indeed the Government has put this to good use and has harnessed the energy such that 50 percent of the electricity on the island is generated geothermically - plans are in place to increase this percentage further. 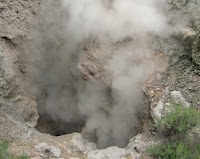 re the geothermal energy is also used to cook ones dinner - One puts vegetables, meat and or fish in a big pot, lowers it into one of the earthernware cased holes in a geothermal area , 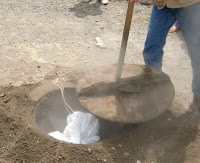 covers the hole with a wooden lid

then piles earth over 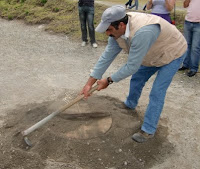 4 to 5 hours later , the pot is extracted and the food ready to eat.

Not only the local people do this but also the local restaurants.

ad arranged for our green energy meal to be
prepared for us - very special.


Tomorrow, Wednesday 9 June, we plan to sail west to the island of Flores - in principle a two night trip.
Posted by dutchlink at 20:31

Dear Mike and Jeanette, great to catch up with your blog again and glad to see that you have made it safely to the Azores. The crew of Pegasus are now back in Oxford (early) having found cheap last-minute flights from Brisbane. I'm back from Bhutan (fieldwork) but just about off to Canada for a friend's wedding. All go. Catch up soon, Clare x

There's a chance you qualify for a new solar energy program.
Click here to discover if you're eligble now!