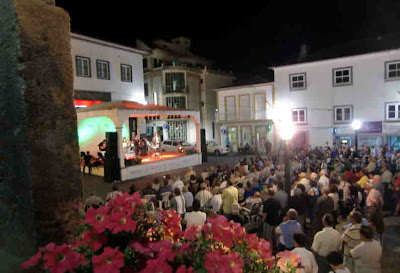 2200hrs 4 August saw us once more sitting on the red carpetted steps of the old Praia da Vitoria Town Hall. This time being entertained (and puzzled ) by pairs of mainly elderly, chain smoking men smartly dressed in suits, singing alternatively in almost Fado style to the accompaniment of guitars. 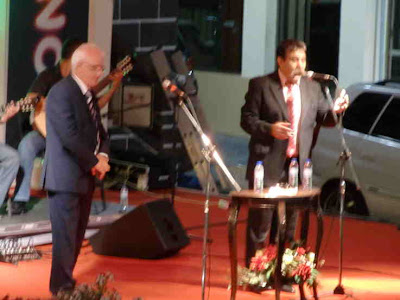 The puzzling thing was that every so often the singer would make more pronounced movements with his hands and raise his voice. At this point the crowd would clap. However, instead of this being the end of the song, his partner would start singing, and the previous singer would quickly light another cigarette. This sequence was repeated many times before finally they embraced each other in a short duet and the next pair would perform.

On talking to various people in the audience we concluded that this was not Fado but a fairly unique form of entertainment which was started on the island a long time ago. Each of the pair is apparently making a lengthy comment (ad-libbing in rhyming verses) on the other singer's behaviour, way of life, politics, incidents which have happened recently or in the past etc. , all the time trying to outdo each other. At the end of each long comment, he raises his voice and gesticulates to emphasise the point he has made. If the crowd is impressed, they clap. The partner then tries to outdo him and gain even more applause.This sequence is repeated several times until they decide enough is enough and embrace each other and sing a brief duet.

We obviously missed the subtleties of this, but it was pleasant to listen to and very interesting to see such an old art form still thriving.


Strolling back to Dutch Link after the performance we were very lucky to bump into Claudina and Jose Serra from 5 Estrellas and their friends Teresa and Manuel - they had arrived this morning in Angra on the second leg of the Atlantis Sailing Race from Santa Maria to Horta. So the evening ended very pleasantly with drinks on Dutch Link.
Posted by dutchlink at 12:00